By News Staff on May 19, 2017 in Entertainment/Local Events/Activities, General Misc. Stories, Public Event

Cynthia Dayhuff, a Registered Nurse at Northern Inyo Healthcare District (NIHD), was named the healthcare facility’s 2017 winner of the DAISY Award for Extraordinary Nurses. The recognition is part of an annual international program honoring nurses for clinical skills and compassionate care. 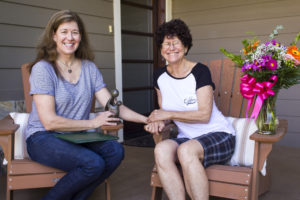 The story surrounding Dayhuff’s honor is an emotional one for many members of NIHD’s Nursing Team as it involves a woman battling malignant melanoma. That woman is one of their own, retired RN Pam Spector.

“I was lucky enough to have worked with Cynthia for many years and witness her competence, compassion and quiet resilience. Not only does she have the attributes you look for in a great nurse – capability, flexibility, and problem-solving – but most importantly she accomplishes that while exuding calm and truly caring,” Spector wrote in her letter of nomination. “It was only in the past two months that I was able to see her strengths from the vulnerable eyes of a person in need.

“When the words ‘malignant melanoma’ stared back at me from my scribble notes after a long-awaited report from my dermatologist, I was dumbfounded, to say the least,” Spector continued in her letter. Dayhuff was the first call she made after her family.

“She is in fact, like family to me,” Spector wrote. “Since then, she has insisted on being at my side to support me. For many years as a co-worker, I had recognized that she was not only a talented nurse but a genuinely loving, true spirit.”

As Dayhuff lives in Mammoth Lakes, Spector in a sense “adopted” Dayhuff, giving the commuting nurse a place to stay during her work shifts. Part-time roommates quickly became full-time friends.

Then with the melanoma diagnosis, the tables turned for former Nurse Spector, who retired from her role in the Emergency Department in 2016. “I have now had the personal opportunity to see (Cynthia) in action as a patient advocate and know that she does the same for the patients she cares for,” Spector wrote.

Dayhuff was presented with the DAISY Award last Thursday afternoon as part of National Nurses Week. Spector, who was preparing for her next step in treatment, was present for the occasion. Clutching vases of flowers given to them by the healthcare district, both women openly cried as Tracy Aspel, NIHD’s Chief Nursing Officer, read Spector’s letter to the assembled nursing staff and NIHD employees. Most of the crowd teared up as Aspel read the closing lines:

“You have a gem of an employee in Cynthia. Northern Inyo Hospital is lucky to have her. So am I.”

For Dayhuff, a NIHD nurse for almost 18 years, the honor came out of the blue. “I was so surprised,” she said Friday.  “I’m just very honored and quite touched. It’s a wonderful feeling to realize that one’s peers and mentors, friends and co-workers value the work you do so much.”

Dayhuff grew up in La Habra Heights. Like many of her peers, she was led to a career in nursing because she enjoyed working with and helping people. “I found health and science fascinating and wanted to learn more in these fields,” Dayhuff said. “I recognized that a career in nursing offered a tremendous amount of diversity.”

With the loving support of her family, she entered Nursing School. “They understand that working odd hours, holidays and weekends comes with the territory,” she said.

Dayhuff moved to Mammoth in 1987, hoping to learn to ski and planning to explore the area for one year. “Pretty quickly I decided to make the East Side my home,” she said smiling. “All these years later I’m still learning and I’m still exploring.”

When asked about her mentors, Dayhuff said she had had many wonderful role models, many of them at Northern Inyo Hospital, and she is grateful for the all they’ve taught her.

So in the opinion of the newest DAISY Award winner, what is that makes a nurse outstanding? “An outstanding nurse is a blend of many traits which include: being compassionate, caring, knowledgeable, resourceful, and respectful, a good communicator, a good listener, a teacher and a patient advocate,” Dayhuff said.

The DAISY award honors the super-human work nurses do for patients every day, explained CNO Aspel. Patients and their families, as well as other nurses within the organization, nominate nurses for the DAISY award.

Dayhuff received a certificate of recognition; a DAISY Award pin; and a sculpture entitled “A Healer’s Touch,” hand-carved from serpentine stone by artists of the Shona Tribe in Zimbabwe.