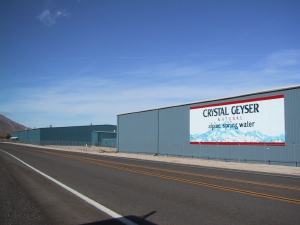 According to the Associated Press, Crystal Geyser bottled water was sentenced Wednesday to three years of probation and ordered to pay $5 million in fines for illegally storing and transporting hazardous waste, federal prosecutors said. Residents of the Eastern Sierra are familiar with the bottled water plant that sits just off to the side of Hwy 395 in Olancha, Calif. It is a popular brand of water in the area and the company provides a good number of Inyo County residents with jobs at the plant.

The waste was produced by filtering arsenic out of Sierra Nevada spring water at CG Roxane LLC’s facility in the Owens Valley. This has been an long-standing issue in the area and one noted at Board of Supervisor meetings in the past when it first came to the county’s notice.

Prosecutors noted that the investigation focused on handling, storage and transportation of CG Roxane’s wastewater, “not the safety or quality of CG Roxane’s bottled water.” While chlorine and other chemicals are often used to disinfect water, arsenic is not, although there is little doubt it could kill effectively.

The company used sand filters to reduce the concentration of naturally occurring arsenic in the spring water to meet federal standards.

CG Roxane was accused of discharging the wastewater into a manmade pond for about 15 years.

Pond sampling by local water quality officials in 2013 found arsenic concentrations above the hazardous waste limit, as did subsequent sampling by state authorities and the company, prosecutors said.

State officials instructed the company to remove the pond but that was done by two hired companies without identifying the wastewater as hazardous material, resulting in 23,000 gallons (87,064 liters) being discharged into a sewer without proper treatment, prosecutors said.

Ok, so you remove natural arsenic from the water that you pump out of the ground to meet Federal statutes for drinking but discharge the water in a pond therefore violating State statues? You cant make this stuff up..

The cost of doing business. The American way of business—sleazy, underhanded, illegal, immoral, and unethical.

I’d bet their own attorneys end up with half of it.

Since they lost and were “ordered to pay $5 million in fines” I would hope T, that their attorney fees would be on their dime. They certainly can afford it. I would also hope that the costs of any mitigation that was required to clean up their mess and future… Read more »

You are right Larry.

And somehow these folks were exempted from the County’s thou-shalt-not-export-water-out-of-a-groundwater-basin ordinance.

Was it Cyndi Lauper who sang “Money changes everything”?

A few bucks in the eyes of Crystal Geyser, look at the amount of water they have shipped, remember when they said “one line” a few hundred thousand litres. If the boys of Inyo county were paying attention at the time, none of this would fave happened. There were local… Read more »