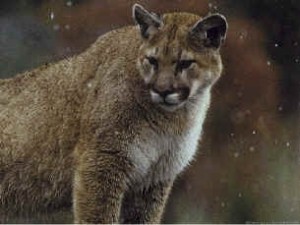 Mountain lions are solitary and elusive, and their nature is to avoid humans. They are most active at dawn, dusk and night. Mountain lions prefer deer, but they also eat pets and livestock.

In extremely rare cases, people have fallen prey to mountain lions. Although mountain lions are neither threatened nor endangered, they are a specially protected species in
California, and it is illegal to hunt or otherwise take a mountain lion absent specific circumstances.

Mountain lions that threaten people are immediately killed. Those that prey on pets or livestock can be killed by a property owner after the required depredation permit is secured. Moving problem mountain lions is not an option. It causes deadly conflicts with other mountain lions already there, or the relocated mountain lion returns.

To keep your family and animals safe, please heed the following advice:
• Do not hike, bike, or jog alone and avoid hiking or jogging when mountain lions are most active.
• Don’t leave small children or pets outside unattended.
• Keep a close watch on small children.
• Do not approach a mountain lion.
• If you encounter a mountain lion, do not run; instead, face the animal, make noise and try to look bigger by
waving your arms; throw rocks or other objects. Pick up small children.
• If attacked, fight back.
• If a mountain lion attacks a person, immediately call 911.
• Don’t feed deer; it is illegal in California and it will attract mountain lions.
• Deer-proof landscaping by avoiding plants that deer like to eat.
• Trim brush to reduce hiding places for mountain lions.
• Install motion-sensitive lighting around the house.
• Provide sturdy, covered shelters for sheep, goats, and other vulnerable animals.
• Don’t allow pets outside when mountain lions are most active.
• Bring pet food inside to avoid attracting potential mountain lion prey.
More information about mountain lions can be found on the California Fish and Wildlife website:
https://www.wildlife.ca.gov/Keep-Me-Wild/Lion.