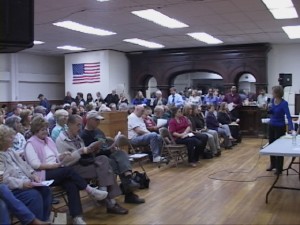 It was standing room only at the Independence Legion Hall.

After three hours of lambasts from a crowd of some 200 citizens, Inyo Judges Dean Stout and Brian Lamb vowed to reconsider their decision to move a major court building project from Independence to Bishop.

After several years of plans and a confirmed $30 million grant for a new court facility in the County Seat of Independence, Judge Lamb suddenly said that the new building would, instead, go up in Bishop. A torrent of objections followed, mostly from southern Inyo.

Those complaints spilled over into a standing room only public meeting held by the Independence Civic Club last Thursday. With eloquent honesty, nearly 30 people warned the judges that they should not abandon Independence as the location for the new court building and accused them of circumventing the public.

Jenifer Castaneda pointed to the State Administrative Office of the Courts and their priorities for the best site. She named 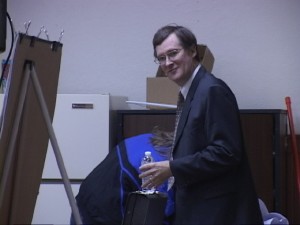 Judge Brian Lamb said he made the decision to move the court project to Bishop.

timely construction, the fact that Independence is the geographic center of Inyo, and has historical significance – all goals of the state. Castaneda asked, Why not build a smaller facility in Bishop with the major one in the County Seat? She accused Judge Lamb of failure to get public input. Castaneda reminded Lamb who elected him. She said he campaigned on a court building in Independence and “southern Inyo put you in office.” The crowd exploded with a huge round of applause

One after another, Independence residents and even some from Big Pine and Bishop spoke of the many losses over the years for Independence and how the town is on “life support.” As the County Seat, all the town has is government, they said.

Charles James of Big Pine told the Judges they had failed to come to the people and lacked honesty. He accused Stout and Lamb of giving the people the “judicial version of an autocratic king.” 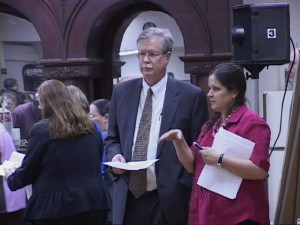 After the meeting, Judge Dean Stout expressed concern that the public felt left out of the issue.

After many southern Inyo residents complained, Ken Lloyd of Bishop stood up with a map to say that the real center of Inyo County is between Lone Pine and the Owens Dry Lake. Even as a Bishop resident, Lloyd supported the new building in Independence.

Supervisor Bev Brown told the judges that 8 out of 10 of her Bishop constituents want the court building in Independence.

Nancy Masters, Civic Club President, said any addition to the small town of Independence would multiply into positive impacts.

Judge Lamb continued his same line of insistence on Bishop as a location, although Judge Stout said he was most bothered by how the people felt they were not heard. Finally, both judges said for the record that they would re-consider their decision.

We work to provide daily news to all of the Eastern Sierra, in the tradition of Eastern Sierra News Service and the Sierra Wave. We bring you daily happenings, local politics, crime, government dealings and fun stuff. Please contact us.
View all posts by News Staff →
Pro Surfer Ward Set for Plea Agreement
Fish and Game Issues Brief Statement on Trout Stocking