William Crosby of Mammoth Lakes, arrested on drug-related allegations more than two months ago, but not charged, has 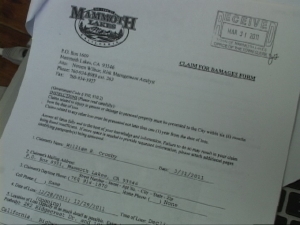 filed claims for damages against the Town of Mammoth Lakes and the County of Mono. Crosby’s claims allege that employees and agents of the Town and County participated in his false arrest and imprisonment.

Narcotics agents had searched Crosby’s home and arrested him, apparently on allegations connected to Crosby’s association with a medical marijuana cooperative called Eastern Sierra Center for Holistic Wellness. Agents alleged sales, cultivation and possession of marijuana, but so far the District Attorney has filed no charges.

Crosby’s claim against the Town alleges false arrest and a negligently performed false and fraudulent investigation. The claim also says that town agents “seized and destroyed the personal and real property of the claimant, violated the civil and privacy right of the claimant and made false and defamatory statements about the claimant.” Crosby’s claim specifically names Mono Narcotics agents Paul Robles and Rick Moberly. 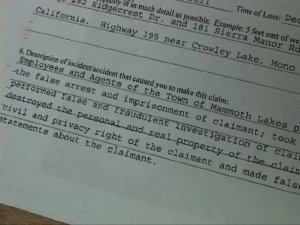 The claim for damages filed against Mono County also names false arrest and imprisonment, a negligently performed and false investigation, seizure and destruction of personal and real property, violation of civil and privacy rights and false and defamatory statements. The claim against the County names Officer Seth Clark, Assistant DA Tim Kendall and other unknown agents.

Crosby’s county claim indicates the claim could lead to an unlimited civil case because “damages exceed $25,000.”

We work to provide daily news to all of the Eastern Sierra, in the tradition of Eastern Sierra News Service and the Sierra Wave. We bring you daily happenings, local politics, crime, government dealings and fun stuff. Please contact us.
View all posts by News Staff →
Jury finds Keller, Jr. guilty of murder/ use of deadly weapon
Bureaucrat Beat: Pickpockets steal, Tuxedo speaks, and popcorn escapes