By Charles James on January 7, 2021 in General Misc. Stories

The coronavirus is mutating

There are concerns about how fast the new Covid-19 vaccines can be distributed and reach enough of the public at large to begin to allow life to return to normal. Best estimates are three to six months. It also depends on other factors.

The coronavirus is mutating and there are now several variants cropping up both in the U.S. and around the world. Some of them do not seem to increase the infection rates of the virus, but several of them apparently do, such as one raging currently in the United Kingdom prompting a six-week shut down. And then there’s another highly infection Covid-19 virus in South Africa.

The danger of mutations or variants is two-fold: Will the mutations cause the virus to spread more quickly. That is, become much more infectious, overwhelm the medical system more than they have already, and with more infected, we can expect the death rate to increase, perhaps significantly. The other alternative, and much less desirable is whether the virus becomes even more lethal than it already is, which is to say, making people have more severe symptoms and cause even more deaths.

There are ways being discussed now by our public health authorities here in the U.S. on how to get the vaccine to the public more quickly. Even if the variants are different, the evidence so far is that the immunity afforded by the current vaccines will still work on the variants found so far. 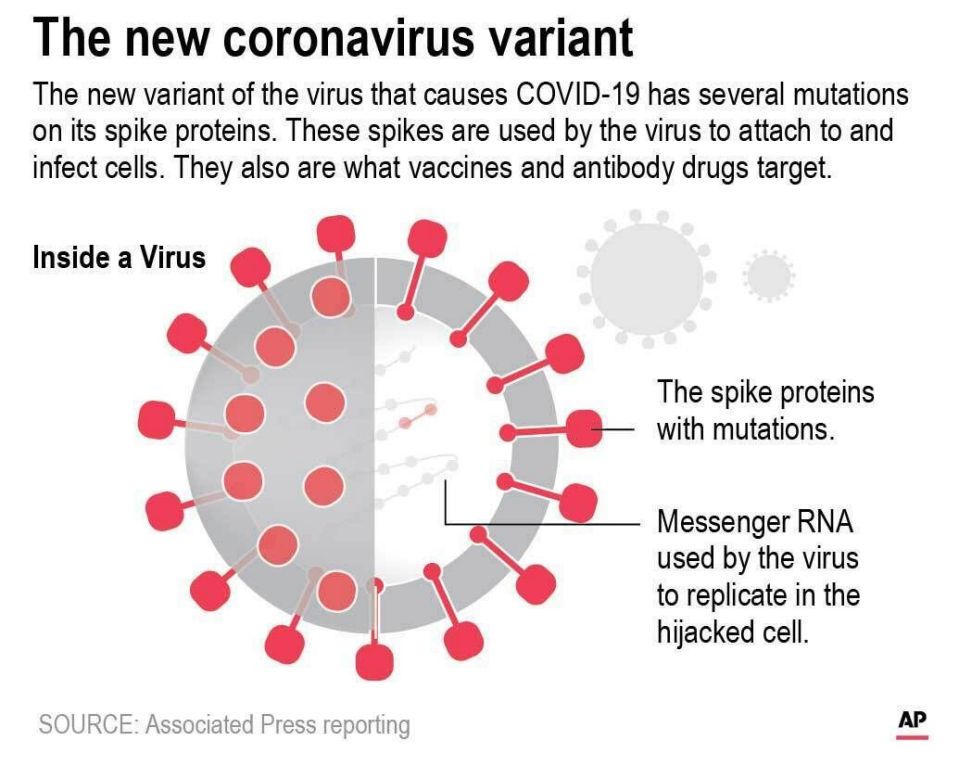 Graphic shows a diagram of the COVID-19 virus.

Right now, our Federal Drug Administration (FDA) is telling everyone to NOT modify COVID-19 vaccine dose schedule or dosage, either by extending the time between the first and second shot, or by halving the two doses. Another idea being floated is to allow the mixing of the vaccines, i.e., starting first with either the Pfizer or Moderna vaccine, and then for the second shot, using whichever is available. Both vaccines supposedly use the same methodology of using mRNA to develop their vaccines.

The UK is getting ready to try some of these strategies because the virus is really out of control in that country and completely overwhelming their national health care systems. They are dealing with the higher infectious version of the coronavirus right now and they are going bonkers trying to keep it under control.

Graphic shows a diagram of the COVID-19 virus.

The real concern with delaying a second dose is that a single shot might only give minimal or partial immunity. The second shot is supposed to make sure the patient gets the highest level of protection possible. Again, our FDA is opposed to this idea at this time, as they are for the idea of giving only half doses until clinical trials can be conducted.

There is added concern, as seen in the United Kingdom, that the number of variants of the Covid-19 virus are multiplying. The biggest concern is the several of the new variants are proving more infectious than the previous one.

The virus that causes COVID-19 is a type of coronavirus, a large family of viruses. Coronaviruses are named for the crown-like spikes on their surfaces.

Multiple COVID-19 variants are circulating globally. In the United Kingdom (UK), a new variant has emerged with an unusually large number of mutations. This variant seems to spread more easily and quickly than other variants. Currently, there is no evidence that it causes more severe illness or increased risk of death. This variant was first detected in September 2020 and is now highly prevalent in London and southeast England. It has since been detected in numerous countries around the world, including the United States and Canada.

And yet another variant recently emerged in Nigeria. CDC also is monitoring this strain but, at this time, there is no evidence to indicate this variant is causing more severe illness or increased spread of COVID-19 in Nigeria.

Currently, the health authorities feel that, even with the variants coming forth, that the existing vaccines will continue to provide some protection and that they can modify the vaccines to counter any new variants.