As if it is not already frustrating to predict where the COVID-19 pandemic is going next, and for how long, both Inyo and Mono County struggle to maintain their current status quo…and both may fail. The shoe(s) may drop by tomorrow, Tuesday, Nov. 3, of this week according to some local officials, or soon after. 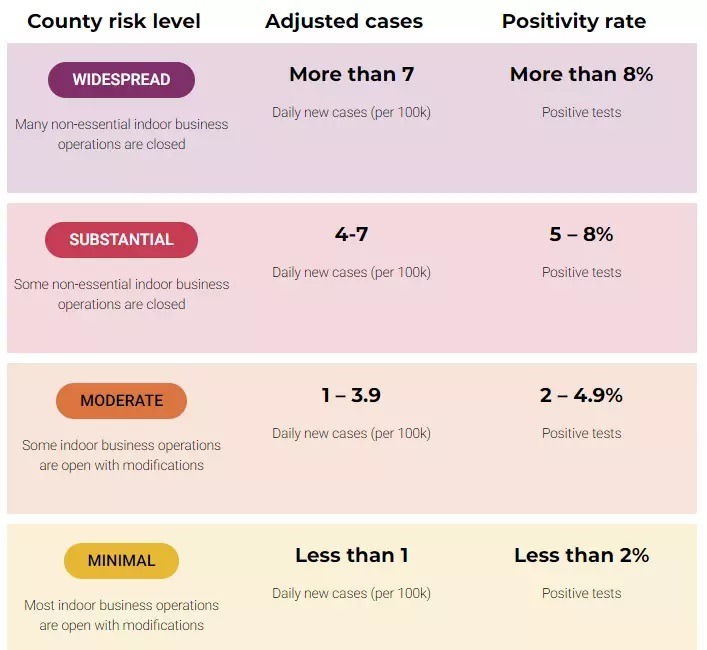 During the reporting period covering October 17-24, there was a spike in Inyo County cases, which under the state’s guidelines threshold for small counties with a population under 106,000 works out to be 14 cases a week or a 5% test positivity rate, could result in Inyo County to be dropped to the Red-tier status.

The Public Health Officer for Inyo County, Dr. James Richardson told the supervisors that there had been 18 new cases since October 20 and the total positive cumulative cases sat at 231 official cases as of Tuesday’s meeting and current as of today, November 1, it stands at 241.

Both McCammon and Richardson said there has been a growing “laxness” evident with following Covid protocols and people going to work sick and sending their children to school sick.

It is generally accepted that reopening schools will result in increasing cases, further adding to the misery index in the county, should schools have to be closed again and businesses forced to “roll back” recent flexibility in operating guidelines. Add in the worry over both the flu season and COVID-19 both happening at the same time, and officials are concerned. It may be a long, cold winter in more ways than one.

Adding to problems in Mono County, (update as of today, Nov. 3) it has been reported that there areas many as 60 positive cases at the Marine Corps Mountain Warfare Training Center outside of Bridgeport, Calif. Mono County is currently at the hard-fought “Orange,” a.k.a. “Moderate,” tier. Reportedly, Mono County officials are attempting to convince the state to not include the marines in the Mono County count as they have no control over it and if added to the county’s number count, would really set back the current Moderate tier that the County currently has under state guidelines.

I would like more detailed information about how and where the increased cases are occurring. For example, I did read a letter from a Bishop school about a case with an elementary student.
Are cases associated with family or social gatherings? We’re speculating about the source of increased cases.

it would be nice if Inyo County would focus on that actually have a history of virus transmission. Instead, they’re stopping locals from doing activities that would be good for morale for our beat up psychies, such as soaking at saline valley hot springs. At least the gyms are still… Read more »

Inyo’s approach to covid is almost like trump’s, pretend it doesn’t exist and act normal, maybe it will go away. This recent surge in Inyo starting in October, was the largest we had in the general public and the largest cases counts. Inyo county is not doing their job protecting… Read more »

What, pray tell, do you suggest Inyo County isn’t doing that it should be doing? The County has adopted local public health orders requiring distancing and masks and Covid-safe business plans; distributed masks, signage, and sanitizer to businesses; taken enforcement actions against businesses including going to court for a restraining… Read more »

Government is the easiest and most obvious target for criticism. The question isn’t always what has or hasn’t been done, it’s what more “can still be done.” And that changes as we learn more and more about this disease. The reason that mortality rates have dropped significantly (approx. 70%) despite… Read more »

Inyo Citizen Thing is,it’s easy to blame the Government for the many mis-steps this Government has made concerning the pandemic. Lying….denying….hiding the true facts…and now,totally ignoring what’s going on.AKA. “rounding the curve”. But I do agree,bottom line,it’s up to the PEOPLE to do the right thing,and ignoring the lies we’re… Read more »

Agreed, I think that, unlike our federal government, the county admin has made most of the right moves for mitigation. The problem continues to be a solid base of people who refuse to take the appropriate precautions. Let’s face it, Inyo county has a lot of “masks violate muh freedoms”… Read more »

On your chart, changing from orange to red is going up, not dropping down.

Thanks for the article. This portion is not correct ” generally accepted that reopening schools will result in increasing cases.” Accepted by whom? The CDC and infectious disease experts are pretty unclear, but what data and modeling exist now show that schools are not driving spread, particularly in younger kids.… Read more »