Talk about a cover girl. The Eastern Sierra made stardom this month on the cover of Westways Magazine, the chief publication of the Auto Club. Described as the back road of California, the writer takes us on a road trip from dLone Pine to Bridgeport. 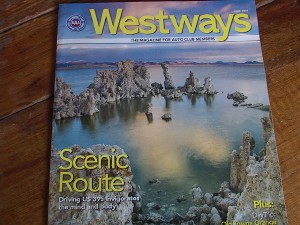 James Dannenberg wrote that “Highway 395 runs from western San Bernardino County to the Canadian border and is one of the greatest drives on earth.” Wow. That’s just the start of the four pages of publicity that give our towns the nomination of vacationland.

Dannenberg takes us on a trip that stops in Bridgeport to look at the old courthouse, continues to the Bodie ghost town and hits Lee Vining and Mono Lake where he credits Nicely’s with the best fried chicken in the world.”

The article seems most taken with the views off 395, from Mammoth on south, with a major stop in Bishop at Schat’s Bakkery and Mountain Light Gallery.

The Manzanar National Historical Site captures a large part of the article. The writer says he’s been to concentration camps in Europe where “cold history refuses to die. This, too,” he writes, “is the case with Manzanar.”

The writer loved his stop in Lone Pine with a look at the Alabama Hills and Mount Whitney. He takes a trip up Movie Road and remembers films from Gladiator to Tremors, shot in southern Inyo.

We work to provide daily news to all of the Eastern Sierra, in the tradition of Eastern Sierra News Service and the Sierra Wave. We bring you daily happenings, local politics, crime, government dealings and fun stuff. Please contact us.
View all posts by News Staff →
Mammoth Man Arrested for Allegedly Pulling a Knife During Altercation
Heavy Budget Talks Ahead in Mammoth