By News Staff on September 14, 2018 in General Misc. Stories

Please beware of counterfeit U.S. currency. Local cashiers, business owners, and bank tellers  are asked to be on the lookout for fake $20 and $100 bills.  The $20 and $100  bills are the same size as real bills with the same design with exception of some Chinese characters printed on both sides, and a dotted black line in one corner. 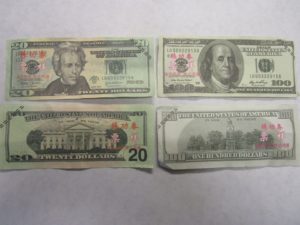 In early July, the Inyo Sheriff’s Office reported that they had recovered counterfeit  $100 and $20 bills. At least one Bishop area merchant and one restaurant received seven of these fake $20 and $100 bills in the last week or so and tried to deposit them into a local bank.  The bank detected the bills as counterfeit.  Per US  law, the bank is not allowed to return the fake bills to the merchant or restaurant and now that merchant and restaurant are out the face value of those counterfeit bills.

According to Chinese banking sources, these bills were created as training tools for Chinese bank tellers so they could become familiar with American currency and practice counting our currency.  The training money was never intended to leave the training facilities, much less find its way to the Eastern Sierra in circulation.  Yet, they are here.

The Chinese writing on the bills translates as. “ Not to be used as real currency” and “Bill to be used for counting practice”. Care should always be taken when accepting money and it is worth the extra few moments it takes to verify the authenticity of the currency. If you receive any currency that you believe to be suspicious or counterfeit, please contact local law enforcement. Inyo Sheriff’s Office at 760-878-0383 or the Mono County Sheriff’s at (760) 932-7549.

Who cares anymore…all a bunch of liars and butt-kissers…with little caring for “we the people”….all makes for good comedy,but at the same time making America an embarrassment and a laughing-stock to the rest of the world…besides,where we live,it don’t matter a rat’s azz who sits in the oval office or… Read more »

It’s trumps fault, no wait, it’s the damn liberals.
Apologies, I was bored.

I got one of these fake bills last year or early this year at my job in Ridgecrest. I knew something wasn’t quite right about it but my supervisor told me to take it and let the bank decide if it was fake (much to my irritation, about a month… Read more »

They were never intended to leave Chinese training centers ? That’s funny…I just bought 10 Grand worth of fifty’s (face value) of these bills from Ebay for a joke on poker night for 9 bucks. While I was on their site, they also have EXACT copies of Morgan silver dollars… Read more »

Why would anyone think these were real?

They look and feel exactly like the real thing, with the only difference is the Chinese writing and no security strip. The writing itself looks like a stamp so unless you could read Chinese, you could be forgiven for mistaking it for a real bill. They’re that good.

there is one bill @ the Arco in Lone Pine also