By News Staff on April 16, 2014 in Government Agencies/Utilities 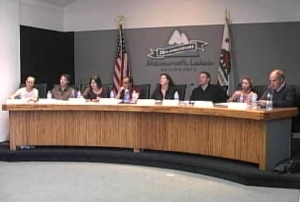 Eight Mammoth Town Council candidates fielded individual questions from moderator Brent Truax Tuesday evening at the Mammoth Chamber of Commerce forum. Some got specific in their answers. Some didn’t. The rules of the forum allowed candidates to pick their own topics to discuss if they had the time. Here are a few examples of questions and answers:

Shields Richardson –
Will the Town Council promote a business friendly environment?
Absolutely. I’m running on a pro-business platform, he said. Richardson supported reaching out to attract business with recreation as a huge part of Mammoth.

Behind the scenes, people call Mammoth Mountain the 800 pound gorilla. Others say it’s why we’re here. What do you see as the inter-relationship between the Mountain and the Town?
Richadson said it’s very important. He said the Mountain, Town, County and Forest Service should sit down and talk. They’re interdependent. The Mountain, he said brings the guests. He called them great partners.

Richadson talked about challenges. He said the key is how does the outside development world look at Mammoth. He said right now, it’s hands off Mammoth. Richardson advocated building the Town’s financial rating and having a Town Council that understands business. 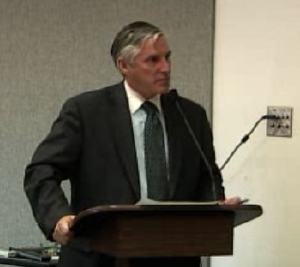 The amount of time and energy the Town Council spends, should it be changed?
There are a lot of committees, he said. Richardson said the Town Council needs to make sure their time is effectively spent. He suggested Town Hall type meetings might be a better environment for interaction with the public. He assured that he personally has the time to do the job. He suggested one meeting per month and one Town Hall.

You have said Mammoth is ripe for opportunities. What are they?
Pierrel said Mammoth needs to know where we are financially. “There needs to be a little more clarity in the budget,” she said. With skirting bankruptcy and a loss of staff, there is an opportunity, she said, to pull together, to prioritize and re-organize the Town. She said there is no issue more important than another. “We have to think through everything.”

What is the role of government in a small town?
Pierrel said the role is to be the leaders of the community. She said the Council should work through the town Manager to oversee the needs of the Town and its infrastructure within a culture that is respectful. She underscored the need to create an atmosphere of respect and innovation. On MLR, Pierrel said the merits are its an entrepreneurial NGO. She said she has serious concerns about pushing it through so fast. She said there is a lot of gray area that needs more definition.

We’re in the third year of a drought. Will a water shortage impact Mammoth?
It’s an immediate challenge, he said. We have to be water conscious – save and use it more efficiently. Wentworth said an interesting challenge will be for Mammoth to become less snow dependent. “We need to offer a full complement of experience.” He said Mammoth needs to show visitors it is proactive with a full suite of recreation offerings.

What Town Council proposals would help revitalize businesses?
Wentworth said Mammoth has all the tools to enhance business and economic development. “We all have to work to create the magnet,” he said. Wentworth pointed to the TBID as a way to exploit maximum advertising. He said he also supports Mammoth Lakes Recreation. Wentworth advised being aware of the components of risk for developers. He said the intangibles are important – marketing horsepower, amenities and experiences. He said Mammoth has all the tools in Mammoth Lakes Tourism and Mammoth Lakes Recreation.

Would he uphold the Developer Impact Fee program?
Wentworth said in the past the DIF program responded to boom times with big projects. He said it’s not working as its needed. He said DIF should not be a wish list but for important infrastructure needs. He said, “We need a focused, specific, credible DIF program.”

Ken Murray –
What prompted you to run?
He said he wanted to be more involved in the community and through the company he works for – Charthouse – and to bring in tourism.

Should there be more economic development? Should the Town Council take an active role?
Murray said there should be more economic development. He said the Town Council should take a more active role, being more “hands on.” He wanted to comment on the 800 pound gorilla. Murray said there should be more communication between the Mountain and Town to promote Mammoth.

Do you think the airport should grow, stay the same, or be smaller?
Murray said he thinks it should grow but questioned if land is available. He said he favors Bishop Airport with a better location yet close enough to Mammoth Lakes.

Cleland Hoff–
Given the $2 million annual debt, what are core services and should Mammoth contract out services?
She chose not to answer that but said she would like to see a more cohesive Mammoth and would not worry about the Town money situation.

Should the Town continue to pursue Mammoth Lakes Recreation?
Hoff said personal family issues had kept her from researching that issue. She moved on to single family rentals and said she does not support that. “We should take care of locals,” she said. Hoff also said customer service in Mammoth is not good and needs to be upgraded. On Mammoth Mountain, she said she has a good working relationship.

What accomplishments would you like to have in four years on Council?
Solid waste, said Hoff. She said there are questions in town and that officials need to do something about it now. “Stop dilly dallying around and bite the bullet,” she said. How to pay for it? Hoff said the Town will have to find the money. She underscored that she does not support single family rentals. She described messes that can happen and that some visitors do not feel the responsibility for the Town or local homes.

Elena Blomgren –
Is customer service in Mammoth good or not?
She said she believes Mammoth has great customer service but can always strive to do better. She advised looking at seasons other than winter to develop activities and attractions for Mammoth’s customers.

67% of Town revenue is TOT. Should enforcement be ramped up? Should nightly rentals be increased or stay the same?
Blomgren said if a single family rental program is implemented, there should be compliance officers to enforce it. She said now there is a struggle to stay on top of TOT.

Should there be partnerships with new or existing businesses?
Blomgren said partnerships re important and that the Town government should explore options. Should the Town take a more aggressive stance with the ORMAT geothermal expansion? She said absolutely.

Colin Fernie –
The economic recovery has been fairly shaky. How do you see it stabilizing?
He said Mammoth suffers from very extreme peaks and valleys. Fernie said the town needs to level off. The extremes, he said, put a strain on customer service and the economy.

Fernie then chose to speak to the debt and contracting for services. He said the lawsuit payment is a line item of the budget and has to be considered as such. Fernie supported contracting for services when appropriate. He supported examining different ways to provide service. He also supported public safety, public works, municipal recreation and community development, plus partnerships with non-governmental organizations.

How can we help enforcement of TOT collection?
Fernie said one of the best things that has happened to the community is that the Town made TOT collection more streamlined. He praised the task force on the issue and for online remittance. “We’re moving the system into the 21st century,” he said. He was asked if there is enough staff. Fernie said they seem to be getting the work done, but he said he’s not versed in that and that it is the job of the Town Council to talk to parties to ask if they have enough resources.

What do you think about employee morale?
Fernie said he does believe it’s an issue. “It’s not the role of the Town Council to micromanage,” he said, “but if the Town Staff needs more positions, I’m interested in that. We do have to focus on the budget.” He favored adding positions if possible to boost morale. He pointed to the past “mass attrition”.

Karen Sibert –
What are the three top issues?
She named the drought as the biggest factor. Sibert said it could go on for ten years and the town would be lucky if it snows next year. The Town Council’s role, she said, is to to determine what to do if we can’t rely on skiing. Sibert wanted to speak to the single family rental issue. She called it really important with serious concerns on both sides of the issue. She supports good enforcement and compliance. Sibert also emphasized the need to generate more revenue with serious collection of T-O-T.

If you had spoken to our Congressman when he was here, how could he help Mammoth Lakes?
Sibert was unclear. Truax asked her if he could influence the Mammoth Mountain land-trade. Sibert said she did not know a lot out that. She did want to speak to Mammoth Lakes Recreation. She said she is “very concerned about the speed its passing through.” She said many constituents are concerned about the pace and ambiguities about the scope of work. Sibert said the biggest concern is the duplication of work and costs. She said the Town organization can handle the tasks.

The County has severe money problems. Will this impact the Town? Should there be shared services?
Sibert said the Town and County are partners and the financial conditions of each do affect the other. She said the two worked together on the TOT committee and on the Whitmore Track partnership.

Check out the next candidates’ forum from the Lions Club and Cerro Coso College at Cerro Coso in Mammoth Lakes on May 6th from 7 to 9pm.

Town councilman in the past have been merely stooges for corporate interests: ski industry, realtors, developers …
Elect regular people and for one term only.

We need to elect every day citizens to the power positions. Those whose lives in general are not so twisted that all their values are translated into money. Money for their pals and themselves. If we allow the Southern California ideology of developing every damn square inch of available land… Read more »

Ken Warner
Reply to  Danger ahead

Ken – It’s never too late to turn things around and focus on the less-than-crazy rich people and their henchmen (town council stooges) always try to pull – especially in bad economic times. Step 1 – Boot out every incumbent and businessman. Step 2 – Put into place more women… Read more »

The people with the real power are not in office. http://thesheetnews.com/2014/04/19/gregory-warns-mitchell-over-lodestar-deal/ “Gregory said there are only two places in town that are suitable for profitable year-round hotels— the acreage around Sierra Star Golf Course and Chuck Lande’s property out at Snowcreek. “We will shut the golf course down and stop… Read more »

And what about the humungous amount of valuable water those precious hotels will be using?

great job by Brent with the debate.

If you’re referring to Lehman, he’s an appraiser and commercial real estate broker. He is not a developer.

Sub-dividing lots in south county is not a developer snow job John ?