By News Staff on July 3, 2014 in Government Agencies/Utilities 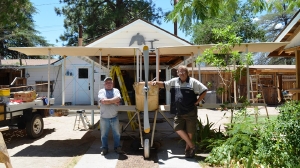 The Eastern California Museum in Independence will be open all three days of the July 4 weekend and will be showcasing a replica bi-plane, a new book on local history and a presentation on an historic “high” in Inyo County’s aviation history.

The air-conditioned Museum will be open its regular hours, 10 a.m. to 5 p.m., on Friday, Saturday and Sunday, with the exception of a Friday when the Museum will not open until after the famous Independence Independence Day Parade, which starts and 10 a.m. and makes two laps in front of spectators on US 395 (thus the nickname, “The Parade So Nice They Run It Twice”).

After the Parade, visitors to the air-conditioned Museum can get an up-close look at the amazing replica biplane that rolled down the parade route, thanks to the Friends of the Eastern California Museum (FECM). The replica biplane is fashioned after the aircraft flown over the top of Mt. Whitney by Silas Christofferson in 1914. His flight was the inspiration for this year’s July 4 theme of “Flying High in Independence.”

This replica of the biplane designed by Christofferson and made to his specifications by aviation pioneer Glenn Curtiss was built by Independence residents Ken Ebert and Mark Wagner with assistance from Ruby Garza, Barbara Leachman, Alan Smith and Dave Wagner. The project was conceived by FECM trustee Sharon Avey and completed with financial support from FECM.

The replica will be stationed in the Museum parking lot on July 4, so folks can marvel at the construction and take photos next to the plane.

On Saturday, July 5, the plane will also grace the Museum grounds while in the Museum, local historian Sharon Avey will present an interesting and thorough explanation of Christofferson’s flight, which took, place only 11 years after the Wright Brothers flight at Kitty Hawk. Avey’s presentation will include a large selection of historic photos, a lively overview of the flight and the big commotion it caused in Inyo County in 1914 and other interesting facts and observations. The presentation will begin at 11 a.m. in the Museum.

The weekend will actually get started on Thursday, July 3, when the Museum hosts the opening reception for the Owens Valley School All Class Reunion. The “kids” will start to gather at about 6 p.m. on the Museum’s lawn to enjoy refreshments, register, reminisce and obtain a schedule for the events being held over the weekend.

OV grad Art Williams will be on hand with copies of his new book, “Reflecting on WW II, Manzanar, and WRA.” Williams’ parents were among the 200 War Relocation Authority staff members who worked at Manzanar. He came to campas a teen and had to adjust to camp life. His book looks at life in Manzanar through the perspective of the WRA employees and their families, and the day-to-day efforts to “run” the camp. The book, “focuses on the complexities of life within Manzanar Camp as employees and internees learned to work together to build a city, complete with hospitals, schools, churches and manufacturing plants, out of an incarceration center.”

Of particular interest to Owens Valley residents are the books’ lists of the civilian employees, military personnel and military police who worked at Manzanar during the war. The lists contain names, job titles, whether the employee lived at camp or in Independence or Lone Pine and, in many instances, personal information about the employees and what they did after the war.

Visitors and residents enjoying the many activities on Independence Day in Independence are invited to make a tour of the air-conditioned museum a part of their day. Besides the museum’s permanent exhibits, the featured summer exhibit is “Building Bill’s Ditch: The Los Angeles Aqueduct, 1913 – 2013.”

The Eastern California Museum is located at 155 N. Grant Street, three blocks west of the historic courthouse in Independence, and is open from 10 a.m.-5 p.m. every day. Call the museum at 760-878-0258 for more information, or check the Museum’s Facebook Page or Web page at www.inyocounty.us/ecmuseum.

We work to provide daily news to all of the Eastern Sierra, in the tradition of Eastern Sierra News Service and the Sierra Wave. We bring you daily happenings, local politics, crime, government dealings and fun stuff. Please contact us.
View all posts by News Staff →
Fourth of July round-up
CHP drug arrest
1 Comment
Newest
Oldest Most Voted
Inline Feedbacks
View all comments

Opps, it must be the heat: I put the wrong day for the parade. Sort of important. The Fourth of July Parade is on Friday, July 4th (imagine that), so the AIR CONDITIONED Museum will be open after the Parade on Friday. Thanks, Jon Klusmire, ECM Director