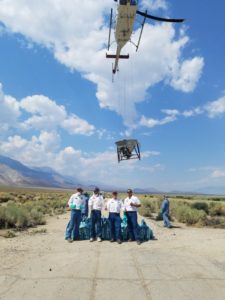 To illustrate the scope of what was conducted during aerial management Rob Miller, OVMAP Interim Manager, stated that “OVMAP applied roughly 10 times the
amount of material used in a year in just two days” via helicopter.

Since the bacteria only target certain species of mosquito larvae, it is safe for use around animals, plants, and other insect species. Control should last from 30 to 60 days.

The Owens Valley Mosquito Abatement Program (OVMAP) supervised these larvicide releases by helicopter on August 31 and September 1 with the help of resources provided by the City of Los Angeles Department of Water and Power (LADWP). 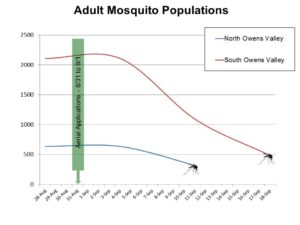 According to Agricultural Commissioner Nate Reade, “this was the first aerial mosquito control effort in the Owens Valley since 1971”. “This was a huge and historic  undertaking for OVMAP and I want to thank LADWP for providing the funds and San Joaquin Helicopters for their technical expertise, both of which were instrumental in making this project a success.”

With ongoing indications of West Nile virus carrying mosquitos in the Owens Valley, the public is encouraged to prevent mosquito bites by:

 Avoiding outdoor activities if possible during dawn and dusk. This is especially
important during the first two hours following sunset, when species that spread West Nile virus are actively biting.

The people trying to help us control our mosquitos are all fishermen as far as I know. Let’s not blame them for our worthless dept.of fish and game!

Is it possible that this naturally occurring bacteria may have something to do with the brain eating ameba or other related illnesses? What other larve does it affect? Surely mosquitos are not the only species. Stoopid humans will never learn. DEET has been proven to cause cancer, still it is… Read more »

Gosh,NOW we have the “authorities” advising people not to go outside during dawn and dusk…this year,think we ALL have had problems with mosquitos…I know I have with fishing and camping trips taken…thing to do is wear repellent…they still get to you,but not as bad….but certainly not enough of a reason… Read more »

its a good thing we have fish n game to keep planting,because the biggest threat to the fish isnt fisherman, its starvation

If it’s so SAFE for Humans and animals . WHY ARE THE TWO GUYS IN THE PICTURE wearing masks??