For the millions with no jobs in our country, news that Congress denied the extension of unemployment benefits struck hard. 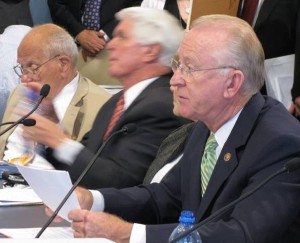 One local woman called to tell us that our Congressman, Buck McKeon had voted no on extended benefits.

We placed a call to the Congressman’s office to hear his thoughts and to find out if there would be another vote. McKeon’s representtive, Bob Hauterer, called Washington and said someone would respond to Sierra Wave Monday.

Republican leaders argued that there must be spending cuts before use of $12.5 billion for jobless aid. The vote was 258 to 154 to extend benefits. That vote fell short of the required two-thirds majority.

One local person who wished to remain anonymous said of the failure to extend jobless benefits, “It’s heartless. People who voted it down have ice water in their veins. For millions of Americans,” said the local, “this is the only source of money coming into homes. What will they do?”

This individual and others who have talked with Sierra Wave expressed disappointment with Congressman McKeon, who has organized job fairs in other parts of his district but not in Inyo-Mono.

This holiday may prove a grim time for those in desperate search of work. Locals discouraged by McKeon’s vote suggest calls to his office. 202-225-1956.

We work to provide daily news to all of the Eastern Sierra, in the tradition of Eastern Sierra News Service and the Sierra Wave. We bring you daily happenings, local politics, crime, government dealings and fun stuff. Please contact us.
View all posts by News Staff →
Bureaucrat Beat: Earmarks Out, Political Theater, and Bought-Off
Joe Parrino on Motocross Track