These are interesting times.

Sunday afternoon, Marge Doyle, a candidate for the District 8 seat in Congress, drew a standing room only crowd in the Bishop City Council’s chambers. 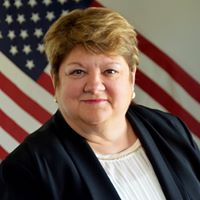 Doyle is from Joshua Tree, an RN who came up through the ranks to take an administrative position with a healthcare company that puts HIV clinics across the country. She’s president of her local healthcare district. And, she’s a Democrat.

Doyle came to Bishop to find out what issues were on the minds of folks in the Eastern Sierra. “I’m asking for my marching orders when I get elected,” she told the 70-plus crowd.

She started the two-hour session answering the big question—why would a Democrat run enthusiastically for a seat in a predominantly Republican district.

After what she described as the trauma of last year’s Presidential election, Doyle figured out a way to make things better. She contacted Congressman Paul Cook to discuss fixing the holes in the Affordable Care Act and provide more accessible care for veterans. Cook listened politely. When the House came up with its healthcare plan, Cook’s staff asked Doyle to review and recommend. “The plan covered fewer people and didn’t save any money—don’t vote for it” was Doyle’s recommendation.

Cook voted for the plan. His response when Doyle asked him why: “it doesn’t matter, the Senate will fix it.” It was that statement that sent Doyle down the path to the June primary for Cook’s seat.

The balance of the two hour session was a Q&A cover a broad range of issues.

Tinner: Be careful…. Low Inyo used to make predictions and look what happened to him. 0 for something… But I hope you’re right. BobK

Marge Doyle, “not a bloody chance in the pit of Haiti.”

If you want further gun/ammunition control, support Ca. becoming a sanctuary state and want to further restrict the public from recreating on their own public lands, vote for the democrat. They all vote as their leaders dictate anyway BobK

@chipcumia Tell me – how is Paul Cook an innovative new thinker?

wow, a platform of the same ole same ole dem talking points….Doesn’t she realize that Americans are sick of the same ole tired positions. We need new thinkers not thinking rooted from 50 yrs ago.

50 years ago protecting the environment, supporting public education, respect for opposing opinions and even the need for healthcare for the poor were not considered partisan issues. Even immigration reform (including an amnesty for those already in the country) was signed into law by Ronald Reagan, elected as a Republican.

Vote decency! You have my support and vote, thank you, Marge!