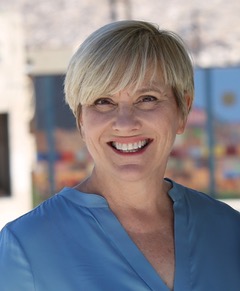 Her meeting in Big Pine was more of a conversation with a dozen residents as she asked Piners what their concerns were. The answers from Big Pine are universal concerns: gun legislation, health care, the environment, education. Bubser’s responses put her in the moderate Democrat category.

On gun control, Bubser explained she was born and raised in Pennsylvania where the opening day of hunting season is elevated to a local holiday. “We need to make guns safer,” she said. She would support background checks and take a close look at assault weapons.

As a bio-tech consultant, Bubser has seen the impact of high-priced health care up close. She supports the Affordable Care Act and negotiating for lower drug prices.

She has spoken to residents in Adelanto, home to a privately-run federal prison and Immigration and Customs Enforcement detention center. For profit prisons are something, Bubser said, that we have to start to address. Aware of the local jobs the facility provides, the answer would be alternative income opportunities like solar power.

For drug offenses, “rehabilitation centers are cheaper than incarceration.”

When the conversation turned to immigration, two Big Pine residents with first-hand experience of the conditions in Central America spoke up. The couple taught in Honduras and saw the impact of gangs. “The fear is real,” they said. “The people are in danger. It’s worse in Guatemala.”

Bubser’s family has had a second home in Mammoth Lakes for nearly 20 years. Over the last 15 years, she has been able to work remotely from her Mammoth residence. She left her bio-tech career “to fight against the repeal of the ACA.”

She told the Big Pine group she called Marge Doyle, who made a run for the 8th District seat in 2016, earlier this year to see if she was going to run in 2020. Doyle told Bubser she should run. So, she is.

Her message is simple: “I want to help take this country where it can be,” she told the gathering. “We need to focus on the possible. We’ll never get to where we need to be by just addressing fears. I’ll be accessible and the only people I will be listening to are my constituents, not special interests.”