By News Staff on December 7, 2012 in Government Agencies/Utilities 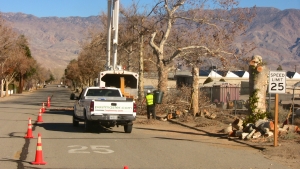 Late last week, an Independence resident on a walk saw a crew start to cut down trees that line Onion Valley Road – a familiar, beautiful and shady feature of the small town.  Another citizen and finally County Public Works checked it out and found that the Los Angeles Department of Water and Power had hired Pestmaster Services to cut down eight trees that were supposedly diseased.

As word spread through town, calls started to go in to Inyo County Administrator Kevin Carunchio. He confirmed that the trees are on the County right of way and that this requires approval by the Board of Supervisors. 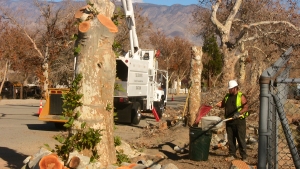 Nina Weisman of Independence said a resident on a walk called her to report that Pestmaster’s crews had cut down two trees and were on the way to a third tree.
Weisman responded.  She asked the Pestmaster’s men about what they were doing.  She said they reported that DWP had hired them.  Weisman said the trees are on a County right of way and the County should be called.  They stopped work.

Inyo Deputy Public Works Director Jim Tatum said there is a Board policy on tree removal.  Tatum said DWP was unaware of that and had received a complaining call about the condition of the trees.  Tatum said DWP consulted an arborist, apparently from Pestmaster who said the trees are diseased with Anthracnose which is a leaf blight.  Tatum said they recommended cutting down eight trees and pruning 13 followed by a fertilization process.

Citizens also pointed to the fact that the trees have not been watered in a ditch which has long run past all 21 trees but has lately been dry.  Tatum said he hopes this issue will be publicly addressed too.  Apparently DWP had plans to re-plant new trees which presumably would have to be watered. The University of Colorado recommends that Anthracnose diseased trees should be treated and watered during dry winters and other dry times.

The County tree policy says removal of trees by parties other than the county shall be limited to trees that must be removed for vehicular access, trees to provide sight distance for an entrance, trees endangering the health, welfare and peace of mind of a property owner, or if a “substantial” number of property owners in the vicinity have signed a statement, or trees that interfere with functions of a public utility where no other reasonable alternative exists.  It’s not clear that the case on Market Street matches any of those reasons.

DWP will have to appear before the Board of Supervisors on this. (Photos by Rick Masters)

I am so dismayed that we keep letting DWP control the Owens Valley. They will keep up any and all attempts to rule and control our valley. They do not care about any of us in the Owens valley, including there employees. They only want water and no intervention from… Read more »

Thanks to Nina Weisman for tellilng Pestmasters that the trees are on a County right of way and glad Pestmasters agreed to stop.

A lack of respect for the town of Independence is the problem here. To blame might be the residents themselves. Businesses and homeowners, look around. Do you see the properties on main street that look like construction zones, the plugged in trailers and motorhomes located illegally behind restaurants and in… Read more »

That is an interesting point Jarod, but I don’t think it is relevant to this issue.

No, no cartoon. I’m serious. We have 3 new board members coming in January. At least two of them worked with FOI and OVC to get elected. I don’t know about the third. This is what we NEED to get these DWP thugs to back down. Articles in the LA… Read more »

I sure hope you are right about our supervisors standing up to DWP but seeing is believing. So I guess we have to wait and see. In the meantime keep nipping at their heels.

NewDay- I hope you are right and would love to finally see our local officials take DWP on. Especially on the ground water levels and dust control problems.

Thanks for presenting hard, cold facts to us Big Al.
We need more that today.
Much better than the usual blowhard far-right sounding opinions you hear on talk-radio shows.

None of my business, but I had heard that DWP had stopped watering those particular sycamores some time ago, which, from my perspective, seemed to be a rather “Darth Vadar”-like move to insure their demise, which would in turn, continue to dismantle the diminishing abience and allure of this little… Read more »

The best defense we have against DWP is all the negitive press it has been getting. The L.A. Times and The SierraWave have had several lately. The Inyo Register seems more fixed on the fruitcake festival and not hurting the local good old boys wallets .

Reality- I disagree, the press is what helps form negative opinions and when it comes to Judges and juries they are far less likely approve of their strong arm actions. All we little people can really do is keep nipping at their heals until they fall.

Yeah right. Negative press has really worked great so far to force the to do the right thing(sic). DWP even ignores valid court decisions.

Well I think they do care about negative press, or at least they should be, or will be …. when someone finally connect this to the world wide green movement. Those greenies we have out there should be telling the mother ship about the plight in the Owens Valley ..… Read more »

Far-right press out of control
Reply to  Big AL

Negative press, Big Al? Do you mean far-right sources like Fox News? Or how about neocon guru, Rush Limbaugh? Your “greenie” remark has given you away Big Al. Limbaugh calls the environmentally conscious enviro-wackos. Thanks for supplying that fact. Situations don’t make the man – they reveal him. It’s the… Read more »

Tad Smidgens
Reply to  Far-right press out of control

I think he was talking about far righties like Rachel Maddow, Al Sharpton, Dan Rather, Bill Maher, CBSNBCABCPBSCNN? You know- all that media. the the right controls.

Ya NewDay, do you have a cartoon attached to that statement?

The new Inyo Board will put a stop to the DWP abuses!

Whatever you are somking, I want some!

I’m shocked and sickened, Not only is LADWP screwing up there own land but now taking it into there own hand to screw up ours.