By News Staff on November 8, 2016 in General Misc. Stories

Computer tech support scams are a dime a dozen these days and not just over the telephone. Now many people using the browsers on their computers are getting “security alert” pop-up screens that claim to be coming from Microsoft, Windows Tech Support, or a major computer manufacturer such as Dell, HP or Apple Computers. 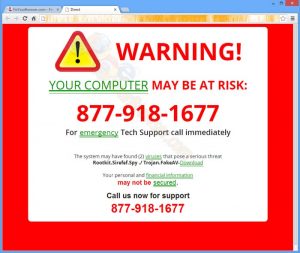 It’s happening here in the Eastern Sierra with some regularity, both the scams over phone and on the Internet. Several local seniors have been victimized and lost several hundred dollars thinking they were dealing with a legitimate business and were having their computer “fixed.”

Usually, whether over the phone or in the online pop-up message, you hear or read variations of a very dire warning stating that:
“Your computer is infected (with a virus). Our Certified Microsoft Technician (or company technician) can fix it for you.”

It may also warn that:

“Personal information including banking details, credit card numbers and passwords may be stolen.”

The thing that you should know is that these things will only happen IF you call the number on the screen and give them information over the phone, and allow them access to your computer.

Never call a phone number on a pop-up screen that pops up out of the blue! And hang up the phone on anyone claiming to be calling call you from Microsoft or any major computer or anti-virus software manufacturer offering to “fix your computer.” These companies do not call you over the phone!

The phone tech support scams have been going on at least since 2008. The purpose is to take control of your computer and get your credit card or banking information. It has now moved online and is found on every major Internet browser in the form of official-looking pop-ups warning that “if you turn off your computer before you call the 800-number provided, you will lose all your computer data” or some variation of that message.

These online con artists exploit a bug in browsers that has gone unpatched, at least in the Google Chrome browser, since its discovery in 2014, at least according to several news reports. In truth, the Microsoft Tech Support scam is also found on all the major browsers including Microsoft’s Internet Explorer and its new Windows 10 browser Edge. Nor are Apple Safari and Mozilla Firefox browsers exempt from the tech support scam.

The way it works is that the bug injects millions of website addresses into the browser’s history, overwhelming the computer’s system and causing it to freeze. It then displays a phony “Microsoft security alert” usually accompanied by a 1-800 number to have it “fixed.”

What happens when you call the 1-800-number? The person answering the phone will eventually demand a fee (usually a couple of hundred dollars) to “unfreeze and fix” your computer by setting up a remote-access connection to your computer.

Giving them access to it will allow them to upload even more malware on the PC while pretending to go through a list of “troubleshooting” actions that do absolutely nothing. And they also have your credit card or banking information.

The added malware downloaded while they have access to your computer also goes looking for more data from the victim’s computer such as contacts, emails, documents, photos, and anything else stored on your PC.

So, what’s the easiest way to “fix” your frozen computer if you are unable to exit out of the web page? First see if you can close your browser. If not, then simply turn off the computer and then turn it back on. Yes, it’s that simple! And then run an anti-virus scan.

Free classes on how to use computers and safely use the Internet are offered regularly at the Bishop Senior Center through a grant from the Margaret Pillsbury Foundation by the Desert Mountain Research, Conservation and Development.