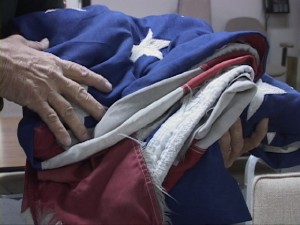 He has it at the Sheriff's Department. Officers will go to work arranging for the refurbishing of the flag, which suffered extreme wear while missing.

The extra large flag was originally stolen by someone and apparently passed around. Rumors had arrived at the Sheriff's Department where it might be found. Lt. Geiger succeeded in securing it for the community.

You may recall the amazing sight of the super large American flag flown at Triangle Park right next to Highway 395. That sight is expected to re-appear soon.l

We work to provide daily news to all of the Eastern Sierra, in the tradition of Eastern Sierra News Service and the Sierra Wave. We bring you daily happenings, local politics, crime, government dealings and fun stuff. Please contact us.
View all posts by News Staff →
Fallen Inyo Officer from 1912 Honored in Sacramento
Bureaucrat Beat: Chips Fall, Necessary Evil, Fun Town