Tuesday evening’s meeting at Lone Pine’s Statham Hall was billed as a workshop to garner community input on Southern Inyo Hospital’s future. Hit with serious cash flow issues, SIH is one- to two-and-a-half weeks behind on payroll and looking at closure if it can’t come up with $13,000 to pay its license fee in two days. 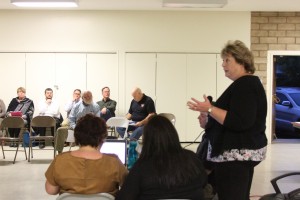 Close to 100 community members provided a lot of input as well as an impromptu fund-raising effort to cover the license. By the time a sign-up clipboard had circulated through half of the audience, a total of $7,000 was pledged with more than a dozen donors signed on with no amount specified.

“We haven’t saved the ship,” Jaque Hickman said. “We’re still bailing. The license money is only a short-term fix.” By the end of the meeting, regionalization, or partnering with other health care providers, emerged as the strongest possibility. 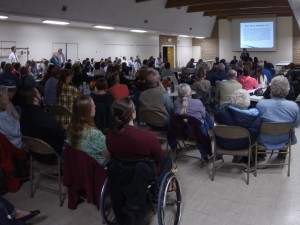 David Sandberg with Focus and Execute was on hand to facilitate, but the crowd wasn’t in the mood to be facilitated. Following Chief Executive Officer Lee Barron’s outline of some of the complexities of rural health care under the Affordable Care Act where reimbursements lag far behind program requirements, Inyo County staff and 5th District Supervisor Matt Kingsley offered some suggestions. “We’re all worried,” said Kingsley. “We hear the rumors of no payroll, staff leaving.” He suggested saving on administrative costs through associations with Ridgecrest Regional Hospital and/or Northern Inyo Hospital. In the middle of Barron’s outline of regulatory changes, Russ Monroe approached alleging the hospital had denied services to his daughter. Barron responded verbally and left the hall. Administrative Assistant Mary Gonzalez stepped up, explaining in more detail SIH’s situation. “We just paid $69,000 for emergency room physicians,” she said. “We’re waiting for $13,000” for the licensing fee, “and $25,000 to pay for employee insurance. Our day’s income was $1,500.” In terms of payroll issues, Gonzalez said “everybody’s (administrators) taking a hit.”

As Sandberg tried to steer the meeting toward a group exercise, Hickman laid down a few rules: “No personal attacks, no personal experiences,” she said. As for the exercises, “we’re out of the mood.”

Jim Suver, Ridgecrest’s chief executive officer, said he had discussed collaborating with SIH with his board of directors. “First you have to stabilize the cash flow and deal with major insurers,” he said. Some of the advantages of developing partnerships, he explained, are rotating specializations on call and access to capital.

“This is not about who’s going to be the top hospital,” said NIH’s Interim CEO Kevin Flanigan. “You have to figure out how to get to a month by month situation not day to day.” Flanigan’s recommendations included figuring out what size hospital the district could support and then looking for partners. “You have to have partnerships with a focus on quality health care,” he said. “When you decide what you want to do, come and talk.”

Other suggestions from community members and staff were forming a hospital foundation, beginning a dialogue on pending legislation and political action and looking at the hospital as a business. “We should have done this two, three, five years ago,” said Doug Thompson. “The most important things are (the hospital’s) employees and trust. We’re losing both.” Thompson also suggested looking to the county’s major employers, Bureau of Land Management, Forest Service and Los Angeles Department of Water and Power, all of whom send employees injured on the job to SIH and NIH.

Toward the end of the meeting, ER Dr. Doug Bushell put that information into perspective. The ER doesn’t just stabilize and transfer, he said. “We’re a frontier level hospital,” he said, “doing what they would at the highest level trauma centers. We had 179 days (in 2014) with patients admitted that shouldn’t have been admitted. They were put at risk.” He explained criteria that required a hospital to transfer patients. “If we don’t have the services required, we have to transfer.” In the past, SIH admitted emergency cases without the equipment or services to support them.

Bushell was supportive of Barron’s efforts to keep the hospital open. “She’s a magician,” he said.