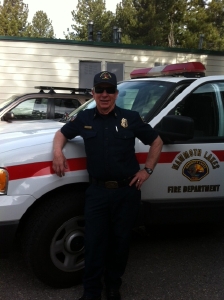 In the early 70s, Bill Anderson of Mammoth Lakes worked at Mammoth Mountain with his brother, Tom, who was a volunteer firefighter.  Bill joined Tom as a volunteer and stayed with the Mammoth Lakes Volunteer Fire Department for more than 38 years.  This week, Anderson retired. Budget problems at the fire department led Bill to retire a bit early, but he said it was a mutual decision.

Bill Anderson worked his way up from volunteer to Division Chief of Training and Safety.  Over the years, he worked under Fire Chief Jon Sweeny.  “Jon was a great mentor,” said Anderson.  He also worked with Chief Harold Ritter and current Chief Brent Harper, who called Anderson “a great asset.  He was always the go-to guy to mend fences and keep people motivated,” said Harper.

Because of a drop in tax revenues and other funds, the Mammoth Fire Department will eliminate Anderson’s Division Chief position for now.  Chief Harper said the other guys will pick up some of Anderson’s tasks.  But no one will claim to replace the affable Anderson, who clearly loves the firefighting business and the community.

Asked about his most memorable fire, Anderson said it was the Rainbow Fire that seriously threatened the Town of Mammoth Lakes in the early 90s.  The fire, which burned dangerously close to town caused some to fear evacuation.  That didn’t happen but firefighters worked diligently.  Anderson said he spent an entire night and much longer in Reds Meadow fighting that one.

He also remembered fighting fires in Southern California as part of a Strike Team from Mammoth Fire.  He said those challenging blazes validated the excellent training of the Mammoth crew.  On training nights, Anderson said, as many as 45 people will show up.  That’s a substantial volunteer group.   He praised Chief Harper for having the “foresight to build the new fire station and get more equipment.”

Anderson also had good words for Fire Marshall Thom Heller and his fire prevention work which Anderson said has reduced dumpster, chimney, and other fires.  He pointed to the house fire on Evergreen when the young girl there heard the smoke detector and remembered the training in school about how to get out of the burning house. “Public awareness really matters,” said Anderson.

The veteran fireman thanked his wife Val for her support over the years when the fire alarm would go off at all hours.  He mentioned that his son Scott got involved video-taping fires.  Scott is now a news director at Fox  Network in New York.  His daughter, Shelby, is a second generation ski instructor in Mammoth.

What now?  Anderson said he’s looking forward to enjoying Encinitas, Mexico ,where he and his wife have a trailer on the ocean.  He’ll fish and “ride the waves.”  Anderson said he loves the mountains and the beaches.  In retirement, he’ll have the best of both.

Congrats on a great run with the dept. Knew Scott would hit the bigtime in TV production, and hope to run into you in Mexico one day..haha!