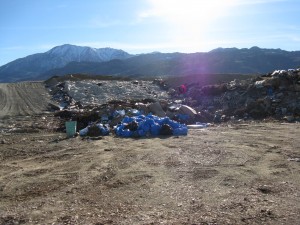 In the Town of Mammoth Lakes, officials struggle with trash and garbage issues. The Department of Water and Power wants Mammoth’s dump on Benton Crossing Road to close in ten years and on top of that problem, the Town faces state-required recycling. Meanwhile, to the south, Inyo County struggles with budget issues. Could regional collaboration solve some problems?

Inyo County Administrator Kevin Carunchio said he sees “a lot of promise” in a collaborative effort over garbage. Carunchio said he has been having conversations with Mono County and the Town of Mammoth Lakes over the last six months on this kind of regional effort. He said the rough idea would include importing Mono County’s waste to Inyo County’s landfill at a cheaper cost for Mono with increased revenue for Inyo.

Carunchio did say Inyo would work with DWP to allow this sort of arrangement since currently Inyo’s Bishop landfill lease with DWP prohibits importing garbage. Carunchio feels that if Mono is interested, DWP will allow this in Inyo. Particularly because DWP wants the Mammoth landfill closed, reportedly for potential water quality issues.

As for a possible regional recycling center, that’s something Carunchio would like to examine. He said it might make sense for Mono to haul recycling materials down the hill to Bishop and avoid a multi-million project in Town. But, costs are still unclear. At a recent Mammoth Town Council meeting, officials noted that Mammoth contractors are already driving their materials down to the Bishop landfill because it’s less expensive.

CAO Carunchio said Inyo is trying to quantify where waste comes from with “waste verification reporting.” This could lead to different price options with locals receiving a discount.

As Inyo County embarks on a major project to reduce budget costs and make up for at least $1.8 million in employee costs, according to Carunchio, regional collaborations are high on the list. This year’s Inyo County budget includes roughly $317,000 for solid waste programs. Carunchio said in the past the cost has come in higher and is expected to again, mostly because of government regulations.

@ Tortoise, Yes recycling does sound like a great idea…but show me where it “pays” to recycle. The County, the Waste hauler, and the Town can not afford to do it. We are a unique breed here in the middle of nowhere. But I have to say bringing waste to… Read more »

The more municipal solid waste that is diverted into recycling programs the less that ends up being buried in a landfill. That, and the cost of establishing new landfills, is the whole rationale for AB939 back in 1989 when the first recycling mandate was passed into law. The more the… Read more »

I have a great idea,,, why not take all the trash from both counties and dump it on the grounds of the DWP in Los Angeles.

The thought of resolving waste management issues with Mono County might not be a bad thing. On the other hand, a cooperative recycling program might be possible, but at what expense. Here is a link to a 2010 Consultants report regarding Mono County Waste Management. http://www.monocounty.ca.gov/sites/default/files/fileattachments/public_works_-_solid_waste/page/748/hdr_final_report_11.30.10.pdf I hope that there… Read more »