Parents of Bishop High students signed petitions and made phone calls. They aren't happy that school officials gave Bishop Football Coach Bill Egan a preliminary pink slip in March. Egan, praised for his dedication to students and athletes over the last 8 years, has no assurance of a job next year. Last night, he stood up to talk straight to the school board. 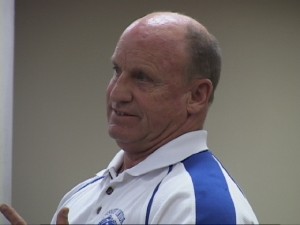 Egan said he had decided to decline a job offered to him to teach at the Juvenile Hall in Independence. "I'm not qualified to teach there," he said. "I am qualified to coach football and teach world history."

Coach Egan, viewed by many in the community as a major school asset, spoke calmly and candidly. He told the Board that while everyone feels restricted with money problems, they have to look at the opportunities. "We need to do some really creative things."

The coach said the school should "make sure to put the right people in the right positions" and not just who is available. He pointed to problems in Mammoth schools where, Egan said, they have forgotten about athletics.

Egan had offered a subtle warning to the Board about where they are headed, possibly away from excellence in sports and care for the kids involved. He concluded by saying that his aspiration is to remain in the Bishop community.

So far, School Board members have declined to make it possible for Egan to stay at Bishop High.

We work to provide daily news to all of the Eastern Sierra, in the tradition of Eastern Sierra News Service and the Sierra Wave. We bring you daily happenings, local politics, crime, government dealings and fun stuff. Please contact us.
View all posts by News Staff →
Armed With 1500 Signatures, Citizens Fight for Klondike
Bishop Mathletes Bring Home Top Honors