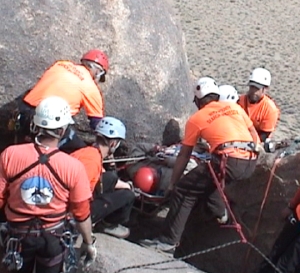 Inyo Search and Rescue shown on an earlier mission.

On October 9, 2013, Inyo County Search and Rescue received a call regarding two overdue climbers. According to the report, the climbers were doing a day climb on the east face of Mt Whitney and were unable to make their way off the mountain by the time the sun went down. One of the climbers was able to text his wife the evening of the 8th and let her know they would continue climbing down at first light. The two climbers found a cave to hunker down for the night and get out of the elements.

The next morning, a storm came in and dumped almost two feet of snow on Mt. Whitney; the climbers were now stuck on a cliff and could not get down. One of the climbers was able to text his wife with the coordinates of their location.

Early in the morning on October 10th CHP helicopter H80 flew to the climbers location. H80 landed one skid on a cliff which allowed the climbers to get inside the helicopter. The two climbers were flown to the Lone Pine Airport where they were treated and released.

In related news, the Sheriff’s Office reports that about 20 members of the Inyo County volunteer Search And Rescue team were trained on helicopter safety skills Saturday at the Bishop airport. CHP H40 crew out of Fresno provided hands-on training. Volunteers are always needed to join the search and rescue team. Stop by the Sheriff’s Posse Hut on Airport Road in Bishop during the Inyo County SAR monthly meetings the first and third Thursday of every month at 7pm.

If you buy a Spot satellite rescue beacon you can also buy SAR insurance as an add on for about $100 to $200 a year as I recall. It covers the cost of evac extraction up to $50k twice a year ANYWHERE in the world. I buy it Specifically for… Read more »

This is all I could find.
$16,000 plus mileage and services.
http://www.sanluisobispo.com/2013/01/03/2345205/helicopter-rescue-price-rates.html
It does mention patients and insurance in the article.
Mongo

Landed one skid on a cliff? That is a sporty move by one intrepid pilot. If the climbers have enough money left over after they pay the bill, which should come to no more than several thousand dollars, they should buy that guy a beer.

I hope that these two climbers plan on making a donation to the Inyo Mono SAR team.

I just want to know the answers, these aren’t loaded questions. If a person gets stranded and needs a helicopter who pays for it? What does it cost? Is the service a free benefit of our tax system? Does health insurance pay? Would Obamacare bronze cover half the cost with… Read more »

The rescued people receive a bill for the helicopter.
BK

not really...
Reply to  Benett Kessler

The SO will send a bill to the rescued party’s county if there’s a mutual aide agreement. Unpaid bills are usually eaten by the rescue county.

I guess you really are an idiot Mongo…..what would being stranded in the mountains and needing a helicopter rescue have to do with healthcare/insurance?

I think Mongo was just exploring how the helicopter might be paid for.
BK

Sugar, are you servin’ sweet and sour today? I love the outdoors and have always wondered what it would cost for a helicopter rescue. About the healthcare issue; A stranded person in the snow could be suffering from frostbite, isn’t that a health care related issue? An injured person needing… Read more »

Mongo…..Don’t think they can actually “bill” you for the rescue….maybe if you didn’t have a permit to climb Mt. Whitney and did it anyway,and needed a rescue…..but even then would be hard to do…thinking these helicopter rescues are really expensive.One of my bosses’ had a fall up in Cerro Gordo… Read more »

Have heard that counties have reciprocal SAR agreements or can charge the county you live in for rescue?