Armstrong handled several Auxiliary jobs including maintaining the archives, serving on the auditing and bylaws committee, working disaster drills, giving hospital tours and serving as a model in a fashion luncheon. One of Armstrong’s favorite jobs was working in the Auxiliary’s gift shop.

Instrumental in raising money to help the Auxiliary purchase the ABUS (Automated Breast Ultrasound) mammography machine, Armstrong took pride in knowing the Bishop was one of the few hospitals in the country to have this machine. In all, the Auxiliary donated $45,000 toward the machine’s purchase.

Armstrong’s vibrant personality balanced her dedication to the all-volunteer Auxiliary, and that as much as her work, cemented her place in the Auxiliary’s history and hearts. “Clara was admired by Auxiliary members and always returned the love,” said Judy Fratella, Auxiliary president. “No one ever heard a harsh word about her or from her.”

The Veterans of Foreign Wars Post 8988 was on hand for the ceremony as well since Armstrong served as a United States Army nurse during World War II. 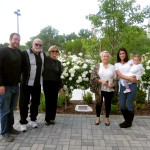 Armstrong died last September at the age of 97.
Members from Armstrong’s family in attendance included her daughters Marjorie Parsons and Marilyn Jackson, and their families. Armstrong’s son, James, who lives in New York, was present in spirit.

We work to provide daily news to all of the Eastern Sierra, in the tradition of Eastern Sierra News Service and the Sierra Wave. We bring you daily happenings, local politics, crime, government dealings and fun stuff. Please contact us.
View all posts by News Staff →
Bishop Mule Days Parade information
Jerry Rupp: 1939-2015