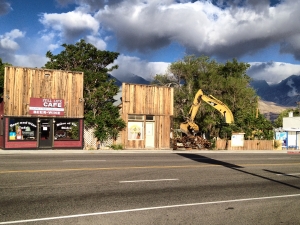 The Independence Civic Club has a long history of taking the lead in protecting Independence, from leading the fight on water metering by the DWP in the 1980s to trying to ensure that our street trees are watered.

Now, the City of Los Angeles Department of Water and Power has torn down a historic barbershop, dating from at least 1900, and is in the process of remodeling the Lions Clubhouse, which was built in the 19th century and served as the post office for the County Seat for many years.  Mrs. Nettie Fausel was the postmistress, with husband Max Fausel working next door at the barbershop.  The Fausels lived in the back, in an addition that is itself historic, with photo documentation from 1926.

The DWP has proceeded without permits and without following state law, CEQA, which protects the historic resources that attract tourists to our town and enrich our heritage.

The Civic Club offered to lease the barbershop, and restore it and the front of the Lions Club to its original appearance, to the Secretary of Interior’s Standards for Rehabilitation.  The DWP did not accept our offer and has not provided any assurances that the proposed remodel is following these standards.

The State Office of Historic Preservation has communicated with the DWP regarding this behavior, in 2010 and yesterday.  You will be forwarded a copy of yesterday’s email also. (See email below.)

What is the County doing in response to the absence of permits, and to the destruction of a historic resource?  They need to respond rapidly and without hesitation to prevent further damage to our town.

I am urging you to call or email the Inyo County Supervisors regarding this matter as soon as possible.  Their contact information is:

Also, please email the Water Commissioners  [email protected]  concerning this very important issue.  A LA City Councilman that has shown interest in Inyo County is Tom LaBonge   [email protected]    I will be forwarding the Office of Historic Preservation’s communication to him.

Often, the LADWP officials in Los Angeles are unaware of the problems and concerns in the Owens Valley, plus they provide direction to the managers up here, so it is important to broaden the awareness of this blatant disregard for process and history.

As you are aware, Inyo County’s CEQA Procedures (Chapter 15.24.020 of the County Code) requires a discretionary review of demolition permits when the structure in question is more than 50 years old and may be of historical, archaeological, or architectural significance.   In 2010,  Office of Historic Preservation spoke to Department of Water and Power staff about the CEQA requirements associated with the demolition of the Hair-I-Am building.  Now the property has been demolished and we understand that the Department of Water and Power did not have a demolition permit.   The Office of Historic Preservation has not received any CEQA documents associated with the demolition of the Hair-I-Am building and we are requesting copies of any CEQA documentation prepared for this project.

We look forward to hearing from you at your earliest convenience.

We work to provide daily news to all of the Eastern Sierra, in the tradition of Eastern Sierra News Service and the Sierra Wave. We bring you daily happenings, local politics, crime, government dealings and fun stuff. Please contact us.
View all posts by News Staff →
“Pacific Crest Trail Academy”
Letter to the Editor: Get proactive