The City of Bishop has secured the services of the executive search firm, Ralph Andersen and Associates, to facilitate the hiring of a new Chief of Police.

It is anticipated the hiring process will take 4-5 months and include a thorough background investigation. 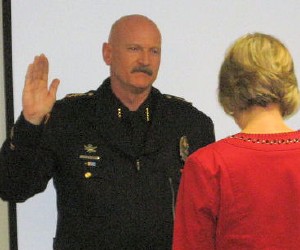 The vacancy is a product of the September 30, 2015 retirement of Chief Chris Carter. He will be ending a 31 year career in law enforcement, the final five years as the Chief of Police.

Carter has agreed to return to the Bishop Police Department as a short term interim Chief under the classification of retired annuitant. The term of the contract will be for a period not to exceed 30 days and provide the City adequate time to identify a long term interim Chief, fulfilling the balance of the anticipated 4-5 month recruitment process.

Additionally, at the request of Chief Carter, the City Administrator and the City Council, the City of Bishop is in the process of soliciting an independent, outside investigator to investigate the accusations included in a letter regarding Chief of Police Chris Carter dated September 16, 2015.

It also included accusations against the City Administrator and a member of the City Council.

Accusations to be included in the investigation will include, but not be limited to, misconduct, violation of established policies, conflict of interest, compliance with a formally negotiated MOU, misuse of government resources and violations of the Police Officers Bill of Rights (POBAR). Upon completion, any and all information resulting from the investigation and not subject to rules of confidentiality will be made available to the public.

Until it is 100% illegal for an elected official to accept one thin dime from any outside source whatsoever, i.e., campaign funds, kick-backs, nepotism, good-ol-boyism, etc … the system you have in place will always be a corrupt one. And it appears it is unstoppable.

Hmmm. I wonder what two elected officials gave a thumbs-down to the criticism regarding capitalizing on their elected position?
LOL!

I agree, “Corruption.” What might get their (elected officials) attention is for the voters at large to initiate a one-term-and-you’re-out policy for a while. This would at least slow the level of corruption down for a while. We’re seeing far too many old, retired dudes who didn’t prepare adequately for… Read more »

Gone mad and running out of $$ as most remote areas with a receding tourist base, are all experiencing.

So the City Administrator and the City Counsel are in the process of hiring an outside Investigation firm to investigate their own wrongdoing? They will find and report what they are paid to report. How much is this going to cost the city? Sounds like an administrative fishing expedition to… Read more »

Disbanding the police department for the sheriff’s office would be a mistake to say the least. Most times there is only one deputy in the north county at any given time, how would that affect response times for a call for service here in the city? As it is, often… Read more »

Maybe my thought process is different than your @ICSO truth… I would assume that with the Bishop PD gone, the Sheriffs office could hire the Officers for additional coverage. I will be interested to see what happens with the meeting today. And hope some of the BPD “employees” keep their… Read more »

You are right, Wondering…funds can easily be re-allocated to ensure a ‘city’ is covered adequately by a Sheriff’s Department….happens all over California. When a City with a PD goes ‘bust’…law enforcement is automatically taken over by the Sheriff’s Office and tax funding sent to them at the same levels.

@Roger without a doubt I agree with you 100%

Why don’t they all go strait to civil court? That seems to be what their all bucking for anyway.

Another outside research team to hire a new police chief. Didn’t we do that before, and we got Kathleen Sheenan? It doesn’t matter if the police department were perfect, and everyone got along famously,there are a few facts we should consider: 1. Bishop is not required to have a police… Read more »

“Accusations to be included in the investigation will include, but not be limited to, misconduct, violation of established policies, conflict of interest, compliance with a formally negotiated MOU, misuse of government resources and violations of the Police Officers Bill of Rights (POBAR).” All very proper, albeit one-sided. A balanced, objective… Read more »

It is important that the investigation move forward for two reasons: 1. The people have a right to know 2. It is important for everyone, including city council, know who is telling the truth and who is lying. The officers should be allowed to approve of the investigating firm. Many… Read more »

John
Reply to  Get Smart

How much will this investigation cost

I’m not sure any thing can really done unless another law enforcement agency steps in?
Nolan has already been punished and I haven’t really heard anything that sounds like much of a crime to me.

I guess the King can retire now. My hat is off to the seven officers that stood tall. Sounds like Officer Danny may need to be looked at by the investigation, due to his poor behavior. I am not so sure this person should be coaching at our local high… Read more »

@desert man, whoever you are, those seven officers showed extremely poor judgment by going directly to the press regarding their complaints, so your hat’s off to the wrong people. There is a process for grievances spelled out in their MOU (their “contract”) and they did not even initiate that process,… Read more »

So what do you consider a good employee Danielle?? I think someone who has morals, values and ethics are attributes that all police officers should possess.The officers who did not sign the letter do not possess these qualities, this is a small town people talk. I feel sorry for their… Read more »

Well, “Mary”, I know all of these seven (some better than others), and several of them do not possess the values that you espouse. Yeah, haven’t seen the “support” for any of these seven that you speak of either. What I have seen and heard is shock at some of… Read more »

Your relationship will end the way it began. Remember that!!!

Danielle, I understand you supporting your husband. Like Hillary supporting Bill, no matter how many transgressions were made by him. As for the support for those seven officers, there is plenty in this community. To say you haven’t seen the support for any of these officers is not being honest.… Read more »

Curley: you guys here are cracking me up! I’ve checked up on the facts here. I got a copy of the PD’s MOU (which two of you signed) and it clearly states the process for grievances. NO grievances were ever filed. These guys (you guys?) never followed the process. They… Read more »

Perhaps it does. If the PD is this dysfunctional, no time like the present to sort things out.

The never ending he said she said! It’s over the chief is gone, now you all need to put your petty difference away and do your job, “protective and serve.” I think the officers got their point(s) across and council took action!

What good is a outside investigation going to do?

It will hold someone accountable. Hopefully the truth, all the truth, comes out. If you can’t trust your small town law enforcement to hold themselves to a higher standard then you are left with nothing.

Absolutely nothing. They will find no wrongdoing, sweep it under the carpet and pretend as if nothing happened. Better to squash the truth lest the taxpayers find out. Unfortunately, there’s nothing to see here. Move along, now.

Or so I hope not.