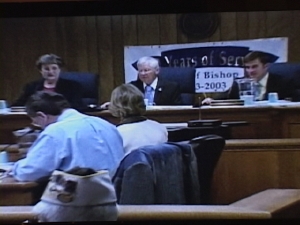 The Bishop City Council has scheduled a retreat meeting Wednesday at 1pm in Suite A of City Hall.  It’s a session to deal with new projects and ongoing issues.

The agenda lists 10 items.  First is the issue of street vendor licenses.  The second item is the Council’s legislative platform followed by next fiscal year’s budget.

The fourth item is Bishop population signs. Mayor Dave Stottlemyre commented to Sierra Wave Media’s Ron Alexander that the Council would discuss the possibility of getting Caltrans’ permission to place new roadside signs north and south of Bishop on Highway 395 and on Highway 6, noting the population of the greater Bishop area, not just population within city limits.

With the Bishop area population between 10,000 and 14,000, the Mayor said it would be good to remind visitors and potential new businesses of the actual market size.  City limit population is just 3,575.

Other agenda items include a slogan contest, the Christmas Parade and the Mule Days Parade Council entry.

The retreat meeting is open to the public.  Wednesday, 1pm, Suite A of City Hall.

I don’t think another sign would do anything for Bishop. It would be nice if the city council would consider underground utillities, or cleaning the puke off the side walks (in front of the bars) or just having side walks that are wide enough to walk on without having to… Read more »

Totally agree with Roger on the side walk issue. This town would look a lot better without all the poles also. I doubt they ever do either.

As long as it’s not Walmart , I would love to see more business in Bishop.