The Bishop City Council continued to meet behind closed doors Tuesday. They will decide the fate of a City employee, reportedly one who works for the Bishop Police Department.

The Council is the final appeal for employees who face discipline or possible dismissal. 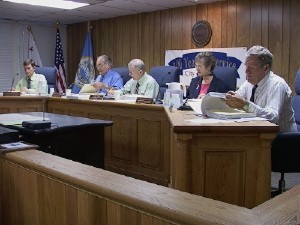 City Administrator Rick Pucci said that City disciplinary procedure starts with a department head who may issue a notice of determination for discipline. Pucci said internal hearings follow and if the employee is not happy with the result, the worker can appeal to the Administrator

If the employee is still dissatisfied with the results of the hearing with Pucci, he or she can appeal to the City Council.

In the current case, the Council began to meet on Monday and continued through Tuesday. Administrator Pucci said he believed the matter would conclude Tuesday.

Pucci said he expected the City Council to take this matter under advisement with a decision to go public later. City Attorney Peter Tracy confirmed that the Council will hold another meeting in about a month and an announcement will go public after that time.

Sources close to the situation indicated only that the employee involved works at the Bishop Police Department.

We work to provide daily news to all of the Eastern Sierra, in the tradition of Eastern Sierra News Service and the Sierra Wave. We bring you daily happenings, local politics, crime, government dealings and fun stuff. Please contact us.
View all posts by News Staff →
Mammoth Physician Attacked by Pit Bull
Big Pine Fire- Not Arson