Monday’s Bishop City Council workshop was to focus on a proposed property value protection ordinance, but the civilians who addressed the council came up with other ways to solve the issue of far too many vacant store fronts in the downtown core. 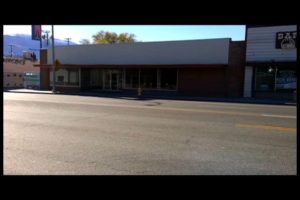 City Administrator Jim Tatum and Associate Planner Elaine Kabala explained the city’s concept of an ordinance was not punitive, rather a way to encourage property owners to do something to erase a semi-blighted look to downtown.

According to Kabala, 22 storefronts are vacant on Line, Warren and Main streets. Fourteen of those are actively for sale or rent, the balance seem to be used for storage. Most were owned by local residents.

Kabala summarized those vacancies: some were in good condition but unrealistically priced, others were too big or in bad shape. The old Main Street Kmart site accounted for almost half of the 130,000 square feet of empty. Plus, the lease is protective of Vons, the owner.

Many of the speakers stressed the cost to bring the older buildings up to code. As Tatum described it: there are 1940 buildings competing in a 2017 world.

Another issue was the lack of smaller sites for business start-ups. An idea that had a lot of traction was to take a storefront like the former JCPenney, gut it, put in ADA-compliant restrooms and subdivide into smaller cubicles.

Amanda Kavanis of Nakid Imagination, an outdoor-focused t-shirt business, does all her selling online, but the idea of a hundred-square-feet plus cubicle was appealing. “The size of some of the available spaces are intimidating and challenging,” she said. “The square foot rate is reasonable” but the size puts the locations out of range.

Gigi De Jong and several others involved in the arts liked the idea of developing a showcase for artists. A former ballet instructor who taught through the city’s Parks and Rec. program, De Jong explained that other teachers were fighting for space to conduct their classes. One solution was for the city to lease downtown space so activities and classes could be expanded.

A three business owner, Cindy Meinke Schoener looked into renting one of the currently vacant spaces but the cost to bring the site up to code was prohibitive.

“The solutions won’t come from a government ordinance,” said Robin Bolser, owner of Great Basin Bakery. “Ideas have to come from the community. To survive we have to get creative.”

Stan Smith of Pleasant Valley Realty suggested the city take the workshop to the real estate, property owner, banking and private investor communities. Tatum said the intent was to hold additional workshops. “Is it important enough for those communities to come here?” he asked.

Following public input, Mayor Pro-Tem Karen Schwartz agreed the community could solve the problem. “We have people with businesses, we have the space. There’s just a disconnect. We have to bring everyone together and come up with creative solutions.”

The next workshop is scheduled for the Council’s January 8 meeting.

Y’all need to enable some silicon valley/SF companies to relocate to Bishop. It has to be an interesting proposition at least. Cheaper housing, talent availability, or relocate people. Sure beats Sunnyvale

Just wait till a Dollar Store comes, that would destroy Bishop.

Thank you Almost Native. Then perhaps we should revisit the location where “they” (the Administrative Office of the Courts, I presume) wanted to put the new courthouse. (It seems the AOC created its own destiny: it picked a location in downtown that would remove a major parking lot in order… Read more »

charles well put, in all the western states there sre only 5 donor states wash, ore, cal ,colo,and texas, the rest are reciever states, yes most red states couldnt make it without fed dollars, which is funny how red states are so adamant about their independence, all of these states… Read more »

Allen, the problem is, if they built it where they wanted to, it would have used the only large parking lot on that side of town. town. Why they didn’t put it in the old Kmart building is beyond me?

The demise of Bishop’s downtown will be exacerbated by the inane decision of the California Superior Court to build a new courthouse on open land on the north end of town, at the intersection of Highways 6 and 395, which will draw commercial activity away from downtown. Conversely, if a… Read more »

It’s a County building, not a Courthouse. So let your supervisors know the idea sucks before it’s too late.

When i moved to Bishop in 1992 it was intact. You could look up and down Main street on any day of the week after 6 pm and not see any traffic at all . But As the state of Ca decided to basically allow the unfettered influx of over… Read more »

The USA has the largest economy in the world. It is followed, (in order) by China, Japan, Germany, UK and California. Yes, CA’s GDP is greater than all but five countries on this planet. Furthermore, for every dollar CA contributes in federal taxes we receive roughly 78 cents back in… Read more »

this town needs a vibrant musuc scene and I am going to get it started ! Mark Vincent /Eastern Sierra Entertainment . please call if you want to get involved 760 924-0000

Any body else remember when our planning commission tried to reroute all our traffic around Bishop? Just for thought.

Hey Dave hope all is well in Texas.
You could come back and work on my cars. We miss you. One of your old customers.

As other cities are finding out online has replaced brick and mortar stores. Malls are being used for gyms and workout areas. Times are changing.

for the good of the community eminent domain ,power to the people

Downtown Bishop used to be a wonderful thriving place until the Bishop City council decided to annex the property at the north end of town onto the city limits. Then they basically held hands with a developer and ultimately ended up with the two bog box stores, A larger K… Read more »