By News Staff on September 23, 2013 in Government Agencies/Utilities 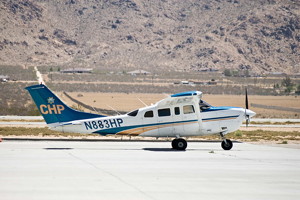 During the approximately two hour and 30 minute detail, CHP aircraft officers identified vehicles traveling in excess of the maximum speed limit and directed officers on the ground to make enforcement contacts.  A total of 16 enforcement contacts were made resulting in 13 citations and three verbal warnings.  12 citations were issued to drivers traveling between 80 and 89 miles per hour (exceeding the maximum speed limit by 15 miles per hour, or greater), one citation was issued for a registration violation, and three verbal warnings were issued for various vehicle code violations.

In 2010, 2,739 people were killed in traffic collisions on California roadways.  Of those deaths, 435 (or 15.9%) were caused by vehicles traveling at unsafe speeds.  Lieutenant Ron Cohan, commander of the CHP Bridgeport Area, noted, “In our daily lives we tend to forget the dangers of speeding.  A traffic collision, especially at speeds such as these, can result in an injury or even death.  The CHP will continue to use all the tools at its disposal to reduce speeding and further traffic safety in California.”

How fast does a CHP car have to travel to catch a car traveling 89 mph?
Do two wrongs make it right? =

No laws are broken if a cop persues a speeder at a speed greater than the speed limit.

The rules governing police driving are different than those for non sworn officers, and they are bound to a different rule book.

I’m still a big supporter of the CHP writing speeding tickets and pulling people over for vehicle issues such as tinted windows. However I don’t think the aircraft is necessary, it’s just big boys playing with big toys while getting paid. And yes I’m a bit jealous too 😉 Perhaps… Read more »

And exactly what kind of vehicle issue is a tinted window, other than just another excuse to pull you over and search your car? It has nothing to do with safety.

The driver cannot see out of tinted windows at night to change lanes or back out of parking spaces. This is why too dark window tint is illegal. I have had occasion to drive cars belonging to acquaintenances with dark tinted windows and you are blind to the rear and… Read more »

Mark….And if I were on the highway and came up to a “BLM check-point”,that would be the time to laugh,roll up the window,and drive away !!

Last aircraft speed enforcement press release claim that speeding was number one cause of collisions was questioned by readers. Now CHP gives hard numbers for deaths. So they do read Sierra Wave?

Saving lives while saving their huge public pensions.
A win win for everyone
GGW

The CHP had a little jihad going on Hwy 14 outside of Cal City Sunday evening, with “patrol” cars hiding in the bushes using radar on the northbound traffic. They were even out on Red Rock Randsburg Road, which is basically only used by locals.

Well, there are a lot of drugs and poaching going on.

There were no sobriety or Fish and Game checkpoints, it was speed enforcement. I wasn’t speeding hence I wasn’t stopped. So your point is??? I still maintain traffic enforcement is more effective with patrol cars actually out on the highway patrolling rather than hiding in the bushes with a radar… Read more »

Agreed, and patrols are more effective for poaching and drug enforcement also. My point is you dismiss someone’s criticism of DFW checkpoint as naive and then use the word jihad to describe law enforcement technique you don’t like.