The Lone Pine Eagles wiped out the Hesperia Christian Patriots, 73-57, Tuesday night in the quarter finalsof the CIF Southern Section Division 6 playoffs, earning a spot in the semis against top-seeded Renaissance Academy. 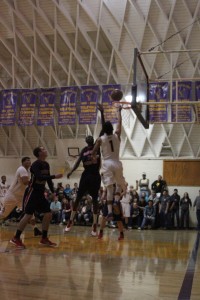 This run really started three years ago when the team was catapulted from a squad that varied from pretty good to very good to one that was magic.

The 2012-13 season was the year Garrett Sullivan, Ryan Cappello, Kishan Bhakta and Brad Greene hit the court. They had played together for years and communicated telepathically. The Eagles made it to the CIF quarter finals from their 2012-13 season through Tuesday night when they broke the quarter final curse.

This year, coach Scott Kemp put his team through the ringer, lining up a pre-league schedule that pitted his Eagles against some serious talent. The team held its own, going into Desert Mountain League play with a 9-4 record, claiming the league championship, 13-1, with a fourth seed going into playoffs.

Lone Pine mopped up the floor against Bethel Baptist, 84-29, and Trona, 85-42. They take on Renaissance Academy Friday in Altadena. 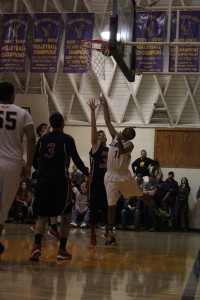 The Eagles took a while to warm up Tuesday night, lagging behind the Patriots 13-8 with 1:29 on the clock.

Then they got hot, holding Hesperia scoreless to end the quarter 17-13. The second quarter was all Lone Pine.

Greene relentlessly pulled down rebounds even against the Patriots 7-foot Abriel Ghak. Sullivan and Bhakta weren’t hitting their usual run of 3-pointers but put on a defensive show that stalled out Hesperia. The Patriots couldn’t stop the hard-charging Cappello unless they fouled him—a pointless strategy since Cappello on the free-throw line is a sure 2-points. Junior Adrian Gonzalez scored lay-up after lay-up.

Hesperia obviously got a serious pep-talk during half-time, coming on strong in the third quarter to take a slim lead. With 3 minutes left in the third, Lone Pine got back on track with a run that lasted until the clock ran out, leading by as much as 20 points in the final minutes.

Renaissance will be a tough game, but the Eagles should be motivated. The Wildcats beat them in the 2013-14 quarterfinals, then went to take Division 6 and go to the state finals before losing to St. Joseph Notre Dame.

But that team of cats is long gone. Conventional wisdom is the Eagles could face off against Price in the finals. 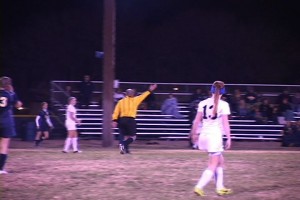 The Broncos are the No.-3 seeded team while Fowler is seeded No. 1.
Bishop, coached by Manny Terrazas, went undefeated in winning the High Desert League title. After a first-round bye in the playoffs, Bishop (17-6-1) defeated league-rival Kern Valley 2-1 in double-overtime last Friday at Bishop’s John Schwab Field and beat host Orosi 2-0 in Tuesday’s semifinals.
Fowler (22-3-1) also had a first-round bye and has beaten Sierra Pacific 8-2 and Woodlake 3-1 to reach the title game.
Bishop at Fowler, for the CIF-Central Section Division 5 title, Saturday. Kickoff is scheduled for 5 p.m.