The Mono County Sheriff Search and Rescue (SAR) Team responded on August 12, 2011, to aid a group of three backpackers from the Nevada City area –  a father, son, and the son’s friend. The three were 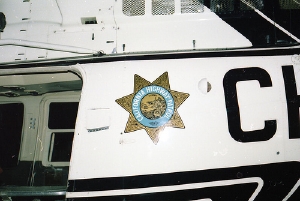 backpacking near Island Pass, north of Thousand Island Lake when the son’s friend, age 12, slipped on the snow and slid into a rock. The injury was assessed on scene as a possible femur or pelvic fracture. Due to the distance required for evacuation by wheeled litter and the lateness of the hour, CHP was contacted for assistance and the H40 helicopter was dispatched. The SAR team staged at the Minaret Vista helipad as a precaution in case additional personnel were needed for transporting the patient to a backcountry landing zone. The helicopter was able to fly directly to the supplied coordinates, land, and subsequently fly the patient to Fresno for treatment.