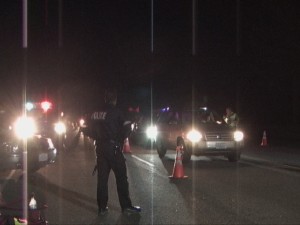 Unfortunately, what cannot be captured in the statistics is the lasting impact an impaired driving event has on those involved.  Lieutenant Jeff Holt, Commander of the CHP Bridgeport Area, wanted to remind residents, “Impaired drivers, either drunk and/or drugged, create a life threatening danger to our communities.  A sobriety checkpoint has a deterrent effect which ultimately makes Mono County safer.  This year alone, DUI related traffic collisions in Mono County are up 60 percent from 2014.  This is a trend that cannot continue. With cooperation from the public and a collaborative effort towards traffic safety from our law enforcement partners, we can reduce DUI related collisions.”

In an effort to reduce impaired driving, the CHP employs sobriety checkpoints to raise awareness and remove impaired drivers from the roadway.  Please, don’t become a statistic.  Always plan ahead and designate a sober driver.

So where was the checkpoint, anyway…..

on 203, going into Mammoth. I went through it, they didn’t even asked if I’d been drinking. But they do ask for your drivers license, something I seem to misplace frequently. I had it with me that night, thankfully. I have to wonder, since they stopped me without probable cause,… Read more »

California vehicle code 12500 makes it illegal, and a misdemeanor, to drive without a valid license on any highway in California. If you weren’t cited, it’s because you were ‘profiled’ and passed.

Looks like they were prepared to greet Mammoth-ites returning home from a night at the Millpond Music Festival.

By purposely neglecting to announce the location of the checkpoint, and instead stating that it would happen somewhere in Mono County, the authorities failed to observe one of admonitions the California Supreme Court set forth in its Ingersoll decision as a factor to consider in determining if a particular checkpoint… Read more »

Allen Berrey :After reading your post I actually “googled” Fourth Amendment…..and was expecting to see something like our “rights” to be able to drive while intoxicated…if we so choose…and how out of line Mono County is by taking that “right” away from us…but it had nothing to do with what… Read more »

Ok, I can’t let this comment go without response. Mr. Berrey is alluding to the fact that while LEO can do DUI checkpoints, they are required to announce them ahead of time, and provide a ‘escape’ point for those who don’t wish to go through the checkpoint. And obviously, the… Read more »

@ highwater. DUI checkpoints have been going on for over 25+ years. Don’t you think someone with more money than you or an attorney trying to make a name for himself, or better yet, the ACLU or organizations that regularly sue cops and government would have stopped this long ago… Read more »

If your so smart, why do you shop at Vons?
P.s. slavery used to be legal also.

This should be an illegal alien check point. I don’t understand how Obama can let people immigrate here illegally but as an employer I can’t hire illegal aliens as a business owner. If we can’t legally hire them what are they going to do after Obama illegal lets them into… Read more »

A little heavy on Obama there John. What practical measures has Reagan, or Bush 1, or Clinton, or Bush 2, used to stop illegal immigration? And just because you don’t hire them doesn’t mean that others don’t. For every undocumented immigrant with a job, there is an illegal employer who… Read more »

John(ald Trump)…..Give me a break….”as an employer I can’t hire illegal aliens as a business owner”….don’t make me laugh….I personally know of a few that do just that….and admit it’s because they can pay lower wages by doing so,as well as getting better work from them than they would from… Read more »

No, they should wait to have reasonable cause to check them. Not sucker in every person who likes to go out on a Friday night.

Perhaps you should read the Supreme Court ruling on the matter. This was settled in the highest court 25 years ago.

Just because you don’t like something doesn’t make it unlawful.

Trouble….The way for those that want to stay out of “trouble” going out on a Friday night…..simple solution….don’t drink and drive…with all our little towns,if you wanta go out and get drunk,your well within walking distance of the taverns…and if your not,get someone to drive that doesn’t plan on getting… Read more »

I don’t know low Inyo, every civil right and little things like probable cause , seem to go right out the door here. What’s next?

I’m not even reading this article. It is unbelievable to me that people can be pulled over, questioned and forced to prove they are not breaking the law in this country. It isn’t right and they know it!

Call it what it is. A Revenue Checkpoint!

Not a problem, I do not ever drive Drunk.

@vons shopper- Your wrong! It is a problem.
Your acceptance of govt. Overreaching in the name of ‘SAFETY ‘ is why they do this. They love that we bow down to every thing they do
They always use safety and blah blah.. because they care. FOLLOW THE MONEY!

Overreaching blah blah…
Old news high Water. In 1990 the SCOTUS ruled that DUI checkpoints are not a violation of the 4th amendment. So in other words – they are not overreaching.

Jones: SCOTUS also once ruled that fugitive slaves had to be returned to their masters (Dred Scott), and that segregated education was just dandy (Plessy v. Ferguson). SCOTUS is not God. SCOTUS is a group of nine unelected lawyers, not a magic wand with which to silence dissent. Based on… Read more »

TB, We live under the rule of law. If you want to look elsewhere for guidance and inspiration – well knock yourself out. And you can try to conflate the issues of slavery and DUI checkpoints if you like. But most people are capable of seeing right through that. Like… Read more »