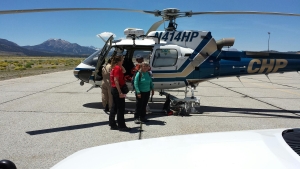 On the morning of Monday, June 23rd, 2014, at approximately 8:00am, a female hiker from Florida was continuing on a multi-day solo backcountry backpacking trip. While traversing the Cascade Valley area, around Silver Peak, she became disoriented and lost. For a 24-hour period, she attempted to relocate the trail and became ill. She stayed in place overnight.

On the morning of Tuesday, June 24th, 2014, the hiker knew she was still lost and activated her SPOT personal locator beacon, sending out a distress signal. Due to her backcountry location, Fresno County picked up the distress signal and a California Highway Patrol (CHP) H40 helicopter responded to the area to attempt rescue. Due to the location of the hiker and the weather conditions, the helicopter was unable to land. The helicopter crew was unable to determine the severity of the hiker’s condition from the air and flew to the Mammoth/Yosemite Airport and requested the Mono County Sheriff’s Search and Rescue Team to assist with a hoist operation.

Mono County Sheriff’s Search and Rescue (SAR) Team members responded to the airport. A SAR Team member, also an EMT, accompanied the H40 crew back to the hiker’s location and was hoisted down to evaluate her medical condition. No medical treatment was needed and she was hoisted out, with the SAR member, and flown back to the Mammoth/Yosemite Airport. No further medical treatment was needed and she was safely taken to her hotel in Mammoth Lakes.

The Mono County Sheriff’s Search and Rescue Team wants to remind everyone hiking in and around the backcountry to be familiar with your route; carry a compass and map; carry plenty of food and water; and always let someone know when you are leaving for your hike and when you expect to return. Stay safe and enjoy the outdoors!

We work to provide daily news to all of the Eastern Sierra, in the tradition of Eastern Sierra News Service and the Sierra Wave. We bring you daily happenings, local politics, crime, government dealings and fun stuff. Please contact us.
View all posts by News Staff →
Vehicles on south 203 vandalized
Letter to the editor: senior meals
3 Comments
Newest
Oldest Most Voted
Inline Feedbacks
View all comments

The “older” couple that followed the directions of a gps out of Jackpot,Nevada 2 years ago, wound up on a logging road & when their van got stuck, the husband went for help on foot in a snowstorm. Hunters on atv’s found the woman ,still in her van 45 days… Read more »

With GPS, no one but us old timers bother with paper maps any more. Even the Navy no longer uses celestial nav and paper charts any more. Everything is GPS and digital charts (which is part of the reason that Navy minesweeper ended up on that Philippine reef, the digital… Read more »

A map , a compass, and a good dose of common sense…It rises in the East and sets in the West