By News Staff on July 6, 2014 in Government Agencies/Utilities 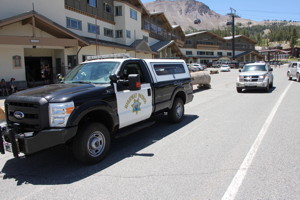 Several weeks ago a reported “bus accident” caused a multi-agency emergency response to the Agnew Meadow area above Mammoth Lakes.  Arriving emergency service responders quickly determined it was not an “emergency,” just a bus that had run off onto the roadway shoulder.  However, the incident did raise a question regarding the weight of buses in the local area.  On Saturday, July 5, 2004, the California Highway Patrol (CHP) conducted unscheduled roadside inspections of four local buses on State Route 203 (Minaret Road), west of Mammoth Scenic Loop, between 9:35 A.M. and 11:57 A.M.

Two of the inspected buses were operated by Mammoth Mountain, and two buses were registered to Eastern Sierra Transit Authority.  One bus fully loaded with passengers and one unloaded bus from each company was inspected.  Inspections included overall vehicle weight, axle weight, vehicle lights, brakes, vehicle documents and driver documents.  The inspections were performed by a CHP officer specifically trained and equipped to conduct these types of inspections.  Three of four buses did not have any violations.  One bus required approximately six of its passengers to be repositioned due to a weight violation before the bus continued.

These six passengers were quickly repositioned and the bus was on its way.  No citations were issued and no enforcement action was taken.  Lieutenant R. D. Cohan, Commander of the CHP’s Bridgeport Area, said “I want to thank both Eastern Sierra Transit Authority and Mammoth Mountain for their professionalism during the four inspections conducted this morning.  I realize this weekend is the busiest weekend of the summer; the exact reason today was selected for these brief inspections.  When a commercial vehicle’s weight becomes a question, it needs to be weighed when loaded to maximum capacity.  We look forward to a continuing dialogue regarding safe and legal transportation that meets the needs of Mammoth Lakes and Mono County.”

We work to provide daily news to all of the Eastern Sierra, in the tradition of Eastern Sierra News Service and the Sierra Wave. We bring you daily happenings, local politics, crime, government dealings and fun stuff. Please contact us.
View all posts by News Staff →
CHP drug arrest
Water for ranch leases still questionable
21 Comments
Newest
Oldest Most Voted
Inline Feedbacks
View all comments

Nobody really cares about the tourists as people. The local businesses only care about how much money they can milk from each one. Tourists are seen as shmoos to be treated nicely until they gush money. http://en.wikipedia.org/wiki/Shmoo The error of that strategy is that people get it. They know when… Read more »

I guess no one cares about tourists pretty sad .unfortunately that’s what keeps our economy going with you we’d like it or not.

I heard Bishop now requires permits for all lawn mowers and Bishop P.D. would be inspecting lawn mowers and handing out citations for unsafe lawn mowers. Permits are $20 annually and are sold only after proof of passing inspection is provided. To make an appointment to have your lawn mower… Read more »

One more example of people being pulled over in the name of public safety. What’s next on their hit list?

As others have stated and I agree with safety. LT Cohan needs to be aware that those were paying tourists. There needs to be a better way to conduct these surprise inspections. I do see safety as a issue. Just another way to do so. As Far as the Axel… Read more »

All the fat kids to the back!

Of course there are axle limits. So do these buses have live weight distribution gauges on board. If not How is the driver supposed to prevent this again? Why all the flack. I suppose all you negative ones don’t care how we treat our tourists. The CHP could have accomplished… Read more »

Anyone interested in knowing more about commercial weight regulations and California Vehicle Code (CVC) sections related to a vehicle’s “Gross Vehicle Weight Rating,” also known as “GVWR” or “axle” weight limitations, the information is available at the state Department of Transportation (Caltrans) website http://www.dot.ca.gov and/or http://www.dot.ca.gov/hq/traffops/engineering/trucks/truck-weight.htm . To see the… Read more »

LT. Cohan If you can help some of us understand. I am under the impression that the bus that needed to redistribute weight was not over the number of persons. If that is correct how is it that possible. These buses carry skiers in the winter which have much more… Read more »

Certainly, MK. First, please visit the DOT website posted above in my previous post. That is easier to use than reading the California Vehicle Code. Secondly, this was the first time I have been involved weighing local buses, so I am unable to comment on the weight of a bus… Read more »

Lt. Cohan, Thanks for the reply. While looking at the links you supplied those seem to be all about trucks. this link is for motorhomes. http://www.dot.ca.gov/hq/traffops/engineering/bus-motorhome/ http://www.dot.ca.gov/hq/traffops/engineering/trucks/trucksize/weight.htm buses are exempt from the front weight limit. What was the issue with the overweight axle? Was the weight over in the back… Read more »

MK, here is another useful DOT (Caltrans) link for anyone with a vehicle over 45 feet: http://www.dot.ca.gov/hq/traffops/engineering/bus-motorhome/bus-maps/busmap-d09.pdf “Transit buses,” by definition, are currently exempt from weight limitations WHEN they meet all of the requirements detailed in Assembly Bill (AB) 1706 (www.leginfo.ca.gov). AB 1706 will sunset December 31, 2014, returning us… Read more »

CHP Lt. Ron Cohan responded to the comment on bus inspections: The first post on the bus inspection story expressed concerns regarding inconvenience to visitors: Inspections of the four busses, of which only two contained passengers, took between 9 and 18 minutes. The 18 minute inspection took that long because… Read more »

Tourists might just be appreciative that someone was looking out for them. Too many bus accidents on the news that nobody wants to be a part of. Thanks CHP!!

Yea right! Our tourists , are you kidding. They are all about me me me and me too. It is tough out there to please them, but they are what keeps Mammoth going. We have no choice in the matter. If it were not for them the place would be… Read more »

A ghost town would be ok with me. The lakes would be cleaner. The trails in better shape. Fewer dogs crapping all over town. Less chance of t-boning a skate border or biker. Easier to walk across the street. A ghost town sounds pretty good to me.

Really? What about when you get hungry?

A busy holiday weekend is a very good time to find out if bus operators are packing passengers on and running overweight equipment. A non-holiday week day might not find violations and sloopy operating procedures won’t be identified and corrected.

Anyone know which bus the Mammoth bike bus or the reds meadow bus had to redistribute weight?

Also How long were the tourists detained?

I appreciate safety and inspections, but on the fourth of July weekend. CHOW could have found a better way to do this that wasting vacationers time and money. If it was not for tourists there would be no busses to inspect. CHE really needs to re think their safety operations.… Read more »