By News Staff on December 5, 2013 in Government Agencies/Utilities 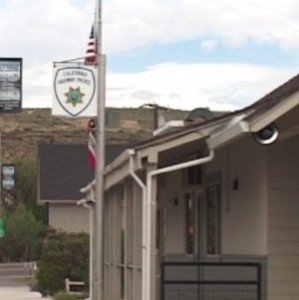 What started out as a traffic collision investigation ended with the arrest of a Mammoth Lakes man on domestic violence charges yesterday.

According to the Bridgeport California Highway Patrol Office, in late October, the Bishop CHP Office was notified by Northern Inyo Hospital of a wreck victim who had been admitted into their care. A Bishop CHP officer went to the hospital and interviewed a woman who said she was the victim of an injury traffic collision several days before and that an intoxicated driver was likely involved.

When it was determined that the incident may have occurred in June Lake, the case was sent to the CHP Bridgeport Office. Weeks of investigative follow-up took place which led officers to believe that no actual collision had occurred and instead the report of a wreck was an effort to “cover up a domestic violence incident.”