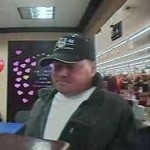 the FBI for bank robbery in Pahrump, Nevada.

A Pahrump newspaper said that on February 11 a man walked into a Smith’s Food store, handed a bank teller a note and left with an undisclosed amount of cash. From a surveillance camera, law enforcement said they identified Charles Leighton, 47.
Officers issued a photo of Leighton’s car, a grey Ford sedan with Nevada plates and issued a felony warrant for bank robbery.

Authorities also said he may be armed and dangerous. The local CHP officer reported that he stopped Leighton near Pine Creek for a mechanical violation. A check of the vehicle and driver brought back the warrant and warning of armed and dangerous. Officers were advised that the subject would possibly shoot it out with law enforcement. Leighton was taken into custody without incident and booked at the Inyo County Jail in Independence.

We work to provide daily news to all of the Eastern Sierra, in the tradition of Eastern Sierra News Service and the Sierra Wave. We bring you daily happenings, local politics, crime, government dealings and fun stuff. Please contact us.
View all posts by News Staff →
Airport hiring of Councilman’s future relative thrown out
Inyo Search and Rescue team tests skills in Alabama Hills