Charlotte Walecke was born October 28th 1918 in northern Ontario, Canada in the area of Monteith Iroquois Falls to Parents Dominic & Alice McAndrew – whose occupation was running the Family Farm which consisted of mostly sheep and other domestics wool – shipped out by train and spare time was knitting plus other the other working of farm life. 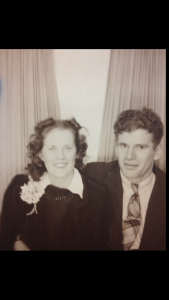 They eventual moved to California around 1962.

Retirement years were spent Snow birding from there home at the shore of Lake Nippissing in North Bay and other travels, eventually moving to the Bishop area to be closer to family in their older years.

Her husband passed away in 2003 Charlotte spent her last two years with her son at his home in Lee Vining, CA passed away peacefully in sleep on the evening of Dec 5, 2016, at home as she wished, under her son’s care.

Funeral services will be held at 11:00 am at Our Lady of Perpetual Help Catholic Church in Bishop, Tuesday, December 13, 2016.