By News Staff on March 21, 2013 in Government Agencies/Utilities

For 10 years, Leslie Chapman has worked as Inyo County’s elected Auditor-Controller. Now, Mono County has made her an offer she wants to take – the Director of Finance. 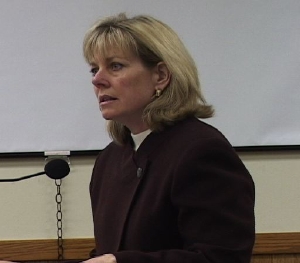 Chapman said that rumors were out there, and so Tuesday she went before the Inyo Supervisors to let them know she had interviewed for the Mono County job, that they made her an offer, and there was a good chance she would take it. Said Chapman, “It’s not a done deal.” The Mono County press release said that “a conditional offer of employment has been extended to Ms. Leslie L. Chapman for the position of Director of Finance.

The release also said that the “interview panel was pleased to find someone not only well qualified for the position, but also so enthusiastic about the challenge.” Chapman said, “This would allow me to stay in the Eastern Sierra but yet do something more challenging and interesting in the next phase of my life.” Her current job involves management of eight employees. The Mono County position would involve more responsibility with 18 employees, oversight of the Treasury, Auditor-Controller and accounting staff in Public Works.

Chapman said there is a great staff in the Inyo Auditor’s Office who can take over. She said of Mono County, “We have talked terms and agreed. There is not yet a final deal.” Sounds like there will be. Mono County officials said they expect Chapman to start employment with Mono on May 1st. If she does take the Finance Director job, Chapman will relocate to Bridgeport but keep her home in Independence.

From the Inyo Register 3/22/13: “Chapman said the county will not hold a special election to fill her position, and will appoint a successor to serve out the remainder of her term. The auditor-controller’s position will be on the November 2014 ballot.” I’m sure you can get the video from… Read more »

Just to correct the record……there has been no decision made. I think there is a misunderstanding. I assumed that because of the cost of holding a special election, this would not be the first choice – my bad. Staff is currently researching the options and the results will be presented… Read more »

I have now read a statement in the newspaper from Ms. Chapman and watched the Bishop City Council meeting on Monday night and heard Supervisor Griffiths say that the replacement will be appointed. There will be no special election. Yet I can’t find on the Inyo agenda where this has… Read more »

Update: The Supervisors will have a workshop, tentatively April 16th to look at their options for replacing Chapman. We will have a story posted soon on more details. They probably have not yet agendized it. Chapman will apparently go to work in Mono May 1st. We’ll keep an eye on… Read more »

Yet according to Chapman and Griffiths, the decision has been made already. Interesting.