A light at the end of the Lower Owens River canal began to shine after 4-1/2 hours of presentations and discussions Wednesday in Independence. 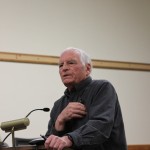 As the packed Board of Supervisor chambers began to empty following the Lower Owens River Project Annual Report meeting, Sierra Club representatives and Los Angeles Department of Water and Power staff and attorney were in discussion on scheduling the work to amend court documents and remove restrictions that, according to the consultants Ecosystem Sciences, were choking the Owens.

Any amendment or change to the 1997 Memorandum of Understanding and 2007 Stipulation and Order would require an “aye” vote by all five parties to the document. The light could still flicker out, but there seemed to be more optimism that, this time, the base flows and pump-back capacity limits could be rescinded, at least for the next two to three years to correct water quality and other issues related to the river’s managed flows. 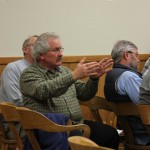 Sierra Club’s Mark Bagley, one of the MOU partners, outlined what he hoped would be elements of a temporary amendment, incorporating some of the concerns expressed by other partners, California Department of Fish and Wildlife and the Owens Valley Committee. Those elements included suspending the flow and pump-back limits for at least two, but preferably three, years, water quality and flow monitoring and reports, possibly limiting the total volume at the pump-back station by linking that volume to the water introduced into the Owens River at the Intake, below Tinnemaha, and reviewing the process after the first year. LADWP Aqueduct Manager Jim Yannotta agreed. LADWP already has monitoring devices ready to deploy; the monitoring will be done regardless of changes to the MOU.

The only concern that may not be immediately addressed was OVC’s Nancy Master’s request that this latest agreement include a feasibility study on the islands, a section near Lone Pine where overflow from a tule clogged channel represents loss to evaporation/transpiration as well as contributing to poor water quality as the water returns to the main river channel. If not a full-blown study, Masters requested a commitment to look at a feasibility study. Yannotta was concerned that the necessary changes be made in the next two months so those changes could be put into effect in late winter/early spring of this year.

Ecosystem Sciences made similar recommendations at last year’s meeting which was followed by a River Summit in mid-summer 2014. LADWP made a presentation at the Summit for varied flows, including pulse or flushing flows in addition to the seasonal habitat flows, and lifting the mandated base flow of 40 cfs and the pump-back capacity limit of 50 cfs. There appeared to be consensus among the stakeholders, but a vote by the OVC board of directors went in the direction of maintaining the restrictions and trying other solutions to a water quality with dangerously low dissolved oxygen levels, tule clogs and the lack of tree growth. This time around, the organization’s vote on amending the MOU and on the amendment itself will be critical.

The major issues with the LORP were defined in presentations from LADWP and Inyo County Water Department staff at the start of the meeting. Inyo County’s Randy Jackson’s job was to report on water quality, defined by levels of dissolved oxygen, necessary to maintain healthy aquatic life. The villain in low DO levels is the decaying biomass resting on the river bottom; the rotting process of, primarily, tules robs the water of oxygen. Low levels of DO and subsequent fish kills have been recorded during high flows that stir up the muck in hot weather.

According to Jackson’s figures, DO levels have been on a downward trend. Part of that trend is attributable to the advancing forest of tules, encouraged by the mandated, year-round 40 cfs base flow. “We’re successfully raising tules,” said consultant Mark Hill. The goal of changing the flow management, for Jackson, was to bring up the minimum DO levels. According to the consultants, levels below 2 mg/l can be fatal to fish. Ambient DO levels, measured before a flushing flow reached the monitoring sit, in 2008 were 9 mg/l and dropped to 2.5 when the flow reached the site.

Jackson’s numbers also provide direction on when to release the higher flows required to break up and move the bio mass, or muck.

Larry Freilich, water department mitigation manager, reported that the number of woody recruitment (new tree growth) recorded during last August’s Rapid Assessment Survey, showed the lowest number of sites since the project began in 2006. “Clonal development is doing well,” he said in reference to bushy coyote willow spread like aspens. “Vertical recruitment (that provide cooling canopies and nesting), not so much.” In fact, the RAS indicated a loss of what small gains were made in tree growth earlier in the LORP process. Initially, the plan was to release a seasonal habitat flow timed with the release of seeds from existing cottonwoods and willows. The problem has been the relatively high base flows during what should have been a naturally low summer flow drowning out any potential tree seedlings.

While the tule encroachment may not be completely solved by a more natural flow management, the current flows encourage that encroachment.

Ecosystem’s Bill Platt was blunt explaining how existing conditions were reached. “We used models to determine the flows and those models didn’t work,” he said. “The river is doing well with what it has to work with” but it might do much better. “The DO levels show the river is on the edge and the fish kills are moving up stream,” Platt said. Ecosystem was against mandated flow management, but at the outset, models indicated that a base flow of 30 cfs would move the muck and habitat flows of 200 cfs would leave the muck on the river banks. “It didn’t work that way,” he said. The 30 cfs number, according to models, were conducive to a small-mouth bass fishery; instead the river ended up with a large-mouth bass population. “When you take the peak (flows) off a river,” he said. “The river will plug up. We have 39,000 tons of tule muck the river has to deal with. That’s a lot for a river with no stream power.”

As for LADWP, the department wanted out from under the 50 cfs pump-back capacity. The maximum the existing pumps can move is 72 cfs. Any overflow coming down the river, not pumped into the aqueduct, goes into the Delta, a habitat area also suffering from tule encroachment due to too much water. The department also wants to maintain water neutrality which translates to no additional water coming down the river channel. That can be achieved, according to Yannotta, by releasing the same amount of water down the channel but balancing that volume with increased flushing flows and lower base flows. The increase in pump capacity would allow LADWP to capture the excess water during high flow periods. “A change in the (MOU) gives us more flexibility in flow management and still be water neutral,” Yannotta said.

If all five parties to the MOU (Sierra Club, OVC, the City of Los Angeles, California State Lands Commission and the California Department of Fish and Wildlife) agree to a change, the county and city’s Tech Group will go to work on the flow management plan.

Steve… I guess you havent visited the aqueduct lately. It is just as overgrown as the river, but they have the means of cleaning this. The river has been flowing for decades… It was never shut down, just brought back to higher CFS. The ONLY thing that changed, is the… Read more »

Two things that need to happen to make the Owens river healthy. First DWP should be able to build the capacity of the Pump back station so it can handle the full volume of the aqueduct reported to be 400cfs to a high of 700cfs. Then divert the full flow… Read more »

Good summary of a complicated story! The collaboration here is good to see – hope we can get a high functioning river out of all this hard work.

Thank you for this excellent report. An additional and maybe just as important benefit of an agreement for the LORP would be a step towards a better relationship between parties with great and historic diificulties . One day there will be a common vision for the stewardship of the Lands… Read more »

Dream on Philip — “a common vision” not likely unless everybody is making money.

Why such a “Debbie Downer” this morning Ken, if you joined the participants at the meeting yesterday, you might have a better understanding of Philips optimism..