By News Staff on October 20, 2011 in Government Agencies/Utilities

On the morning of Thursday, October 20, 2011, at approximately 6:50, Mono County Sheriff’s Department dispatch received a call regarding possible gun shots fired on Valley Road in Chalfant. 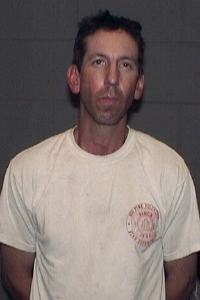 Mono County Sheriff’s deputies, along with California Highway Patrol, were dispatched to a residence on Valley Road in Chalfant with the report of a man yelling followed by the sound of multiple gun shots. When deputies arrived on scene, they observed a fire in a burn barrel actively burning in the back yard. Deputies made contact with Kenneth Wayne Riggins, age 37, of Chalfant. Mr. Riggins had placed live ammunition into an actively burning barrel causing the ammunition to be set off.

Chalfant is one the most wonderful places to live. Good neighbors, great scenery, and beautiful big lots= priceless peace. Perhaps people are reacting to this incident with such judgement against the place and not the person is because it is so rare to hear about such things here.

There’s no comparing anywhere in Southern Calfornia to Chalfant. Chalfant has some beautiful views that can’t be found anywhere else. You can also find one of the best cheeseburgers around at TJ’s. One of the pleasures of living out in the middle of nowhere use to be not having to… Read more »

To me, Chalfant reminds of Watts, Compton, or East LA with mountains and a lot of blowing sand. Numerous residents are in GROSS code violations and the community has an inordinate number registered sex offenders. I’ve considered buying there but every time I’m there I just shudder at the thought… Read more »

I don’t support putting ammo in a fire pit, but I don’t think bullets fly around like missiles without being in a barrel of a gun. I would think they act more like a fire cracker???? Anybody know for sure?

JJ- Firecracker? Yes and no. The energy of the bullet coming out of the casing would be highly diminished and therefore would not have as long of a range of travel. This is because much of the energy of the burning powder is expelled backward blowing the casing back and… Read more »

“Anybody know for sure?”

No. And I don’t want to be around to find out.

I agree with sierragrl & Justin. I have lived in Chalfant for 8 years and this is the first time I have heard gunfire in the neighborhood, it was scary. But what I have experienced in Chalfant for the last 8 years has been great neighbors, peace & quiet, no… Read more »

I don’t think we should judge chalfant on the actions of one very stupid man. one of the benefits of chalfant is large lots and lots of space and privacy and the ability to live as one likes…this guy is just plain stupid, no if ands or buts….there’s stupid people… Read more »

Wayne, the GOOD people of Mammoth have no control over who decides to move to, or live there. Unfortunately, bad things happen to good people, everywhere. I seem to remember not too long ago where a man was nearly beaten to death in his own home in YOUR hometown of… Read more »

I remember that beating incident in Lone Pine….a bunch of stupid drunken unemployed pothead kids playing tough guys….and ending up getting 5 years in State Prison…for trying to steal electronic equipment.Our town is much better off without them in it.Just too bad the victim of the beating didn’t hear them… Read more »

Big Rick…..Your right….Mammoth got too big too quick…But I can remember a time back in the 80’s when people up there saw it coming…and could have done something about it…30 years ago….if they wanted to.But the “quiet little town in the mountains” isn’t what they wanted….they wanted the extra tourism,the… Read more »

The property in question is a 1 acre lot with 2 mobiles. 1 of these mobiles has had, and I use the term very lightly “additions”. I can guarantee that these do not meet any saftey codes in any way shape or form. Hence the red tag. Chalfant is really… Read more »

And apparently that’s also how you spell in Chalfant…

It’s Chalfant, is this seriously a surprise?

That’s how we role in Chalfant!

There is something missing from this story. What does the building dept. have to do with some moron throwing live ammo into a fire? Are we to assume that so many rounds went off that it weakened the structure to a point that it had to be red-tagged?