By News Staff on May 7, 2015 in General Misc. Stories, Government Agencies/Utilities, Letters to the Editor, Public Event

BISHOP, Calif.— The Center for Biological Diversity, Public Employees for Environmental Responsibility and Inyo County today settled a lawsuit on the so-called “Adventure Trails” pilot project, limiting it to seven dual-use roads totaling 44 miles. The original county proposal, as analyzed in the environmental impact report, would have opened 242 miles along 38 county and city roads across western Inyo County to dirt bikes and all-terrain vehicles, allowing them to drive with current street traffic and pedestrians. 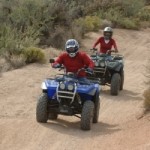 The agreement requires that any potential expansion of the program to the remaining 31 roads would have to first undergo environmental review with public notice and comment.

“Limiting the number of miles of roads to be shared by street traffic, pedestrians and off-road vehicles should help reduce harmful impacts and allow research to be done to determine whether ORVs should be allowed at all on local roads in Inyo County,” said Ileene Anderson with the Center for Biological Diversity.

A fully implemented Adventure Trails program would have increased ORV traffic, noise and air pollution in the eastern Sierras, OwensValley and beyond — as well as increasing degradation of wildlife habitat and precious water resources.

“The settlement caps the number of trails in the Adventure Trails System to the seven approved by the Board, but does not allow expansion based on the existing EIR. This provides interim protection for natural and cultural resources, as well as residents, who can still appeal to their legislators to terminate the project in 18 months,” said Karen Schambach with Public Employees for Environmental Responsibility.

In 2011 the California legislature adopted A.B. 628, which allowedInyo County to establish a pilot project to designate combined-use roads up to 10 miles long on unincorporated county roads to link existing ORV trails on lands managed by the federal Bureau of Land Management and U.S. Forest Service to services in towns. The off-road industry itself warns against using ATVs on public roads; the state of California only approved legislation allowing a pilot project after requiring indemnification for liability by the county. Inyo’s pilot project is set to expire in January 2017 but may be reauthorized based on the outcome of this pilot.

The Center for Biological Diversity is a national, nonprofit conservation organization with more than 825,000 members and online activists dedicated to the protection of endangered species and wild places.

This is what happens when people try to fix something that isnt broke. For crying out loud, was it really that big of an inconvienence to trailer the OHV or use gas cans to refuel? Why did we need a “trail system” did everyone forget that we already had access… Read more »

Wayne : Here is what I think it means,based on my rare dealings with an insurance claim…If an ORV’er happens to crash into a vehicle,a pedestrian,a child,etc.,their Insurance company will not pay out,if they warned those about riding on the paved roads.So,what it will mean is it will be up… Read more »

will be liable in a law suit resulting from il advised mixing of public and off road vehicles? It looks as though insurance companies are going to back away from this legal tar baby .Even The off-road industry advices against this area of uncertainty. It seems as though this off… Read more »

Indeed. GEICO Insurance issued a press release warning OHV operators to stay off paved surfaces. https://www.geico.com/about/pressreleases/2014/20140313/ If an operator shows an insurance card to an Officer do the operator, the Officer and Insurance Provider all have the same idea about what activity is actually insured? Or does the fine print… Read more »