By News Staff on September 28, 2013 in Government Agencies/Utilities 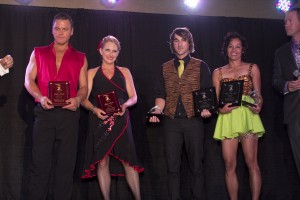 The second annual Healthcare Trust of Mammoth Lakes’ Dancing with the Docs gala fundraising event was a huge success!  Net proceeds, which are still being tallied, will contribute to the Healthcare Trust’s mission; to develop Mammoth Hospital’s facilities, programs and technologies improving health care for residents and visitors in the Eastern Sierra.  Mammoth Hospital physicians paired up with local celebrities who practiced regularly for months leading up to the final event, all showcased in nine TV episodes.

Dancing with the Docs this year saw six dance teams compete, all with varying levels of previous dance experience.  Starting off the evening were the “High Mountain Hicks,” comprised of Dr. Marty Kim, OB/GYN, and Jason Crockett, an actor, writer, and director in local theater.  The two impressed the crowd with a country swing dance and showed an amazing amount of improvement from their first practices as Dr. Kim had no prior dancing experience.  Then came team “Jive Turkeys,” comprised of pro skier, Chris Benchetler, paired with Physician Assistant Karly Dawson. The pair really got the crowd going with their energetic and acrobatic Jive, featuring dips, flips, and kicks.  Team “Drama Mammas” came next, featuring the hospital’s new general surgeon, Dr. Fru Bahiraei with performer, and personal trainer, Jenn Collins.  Bahiraei comically lead the performance with a ukulele solo, and after being reminded it wasn’t “Jamming with the Docs” tossed the instrument aside and turned up the energy with a wildly-entertaining and eclectic modern fusion dance. The team’s performance lead into the event’s intermission, leaving the audience and judges wanting more.

The action picked back up where it left off as “Team Money” took the stage.  Dr. Jason Bishop and Allison Page, a former actress, local dancer, choreographer and theater director danced the Foxtrot; an elegant, sophisticated dance that could have been straight out of the 1930s.  Allison, as expected performed flawlessly, and Dr. Bishop surprised everyone with a stellar performance despite having had no prior dance experience.  Then came a familiar face to Dancing with the Docs; Dr. Jennie Walker, who competed last year.  This year, Walker was partnered with Survivor finalist, Matty Whitmore, born and raised in Mammoth, now a personal trainer in L.A.   Their steamy and very precise tango thoroughly wowed judges and audiences alike with a sultry attitude to match.  Last but not least was “Team Break-A-Leg,” composed of Dr. Kim Escudero and pro snowboarder, Gabe Taylor.  Dr. Escudero had set the bar extremely high with her 2012 Dancing with the Docs performance, and came back this year ready to up the ante.  It was obvious her partner, Gabe Taylor brought his competitive edge as well.  The two danced the Lindy Hop, spinning and flipping their way through each step, leaving audiences stunned at the sheer difficulty of the moves they pulled off with precision.

Emceeing the event was Mammoth Hospital’s Community Relations Director and Event Coordinator for Dancing with the Docs, Lori Ciccarelli, with Mammoth Hospital Human Resources Manager, Jeff Byberg.  The two kept the event running smoothly with jokes and entertaining dialogue on the dancers, choreographers and judges.

The competition came down to the wire, but Team Tango composed of Dr. Jennie Walker and Matty Whitmore took the “Judge’s Best” award, leading the charge earning 39 out of 40 possible points. Taking both “Most Philanthropic” as well as “People’s Choice” awards were Dr. Kim Escudero and Gabe Taylor of Team Break-A-Leg, raising the most money and receiving the most votes by the audience.

Judging the event was Juliana Olinka, Shira Dubrovner, Wendy Knapp, and Dr. Yuri Parisky.  Both Knapp and Parisky had been dancers in the competition last year, with Dr. Parisky taking home the top three awards.  Olinka and Dubrovner both work in the entertainment industry and came highly-qualified to judge the event.

“The dancers and choreographers were the hardest working volunteers I have worked with,” said Event Coordinator, Lori Ciccarelli.  “We so appreciate their dedication to Mammoth Hospital!”

The Dancing with the Docs finals will be aired on Sierra Wave Television on Friday, September 27th at 5:30pm, and available online following the broadcast.  Watch all episodes of the Dancing with the Docs television mini-series at www.mammothhospital.com and look for the showcase event again next year as it will be back by popular demand.  For more information, contact Bubby Greene, Fund Development Coordinator at (760) 924-4128.

We work to provide daily news to all of the Eastern Sierra, in the tradition of Eastern Sierra News Service and the Sierra Wave. We bring you daily happenings, local politics, crime, government dealings and fun stuff. Please contact us.
View all posts by News Staff →
Letter to the editor: fish need oxygen
LADWP Commission meeting televised in Bishop