A celebration of life for Mammoth resident John Bachar is scheduled for this Saturday night. The celebration is also a fundraiser Bachars son. 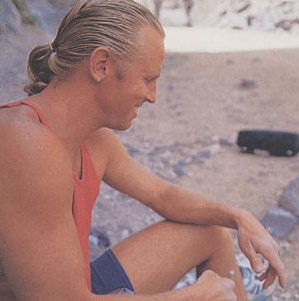 John Bachar was renowned world wide for his high level of climbing since the mid seventies. Known for difficult climbs with a rope, Bachar became a climbing icon known for difficult ascents with out a rope, using only his hands, feet, and skill to keep him on the rock. He died after a fall while free soloing at the Dike Wall in the Lakes Basin on July 5th.

Since his death, full length stories and obituaries have appeared in both the national and international media. The LA Times, and the New York Times have published lengthy obituaries about a man who used a semi obscure sport like rock climbing to change peoples perception of what is possible. Even the British Magazine, the Economist ran a full page obituary for Bachar.

Now it is time for the locals here in the Eastern Sierra to celebrate an inspirational friend and help out the son he left behind.

The celebration of life is a dinner party, packed with food from local restaurants like Skadi, the whitebark and Thaid up. Local musicians and DJs round out the event that will also include a fundraiser raffle.

The event kicks off 5:30 Saturday at the Westin in Mammoth. Tickets are $50. More information is available at johnbachar.com

We work to provide daily news to all of the Eastern Sierra, in the tradition of Eastern Sierra News Service and the Sierra Wave. We bring you daily happenings, local politics, crime, government dealings and fun stuff. Please contact us.
View all posts by News Staff →
Klondike Committee Gains Support
Flu Shots Available