By News Staff on June 28, 2017 in Government Agencies/Utilities 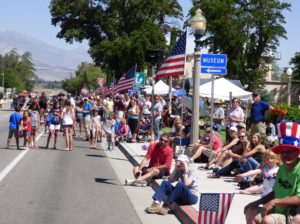 This year’s festivities will stretch over four fun-filled days, and feature performances by three different local bands, two beefy barbeques with all the trimmings, dedication of Inyo County’s newest railroad, a unique Fourth of July parade, and, of course, a rousing display of fireworks to close out the Fourth of July.

All of the events and activities are being organized by community volunteers and local groups or organizations, making it a true community celebration. There is still time to get in on the fun and sign up for the parade or arts and crafts fair or donate to the Independence Volunteer Fire Department for the fireworks show. 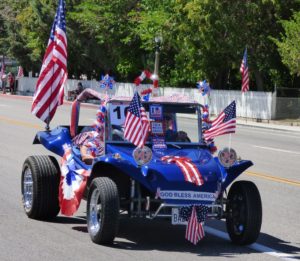 The fun will begin on Saturday, July 1, with a Town Hall Dance in the historic Independence Legion Hall. Local musical favorites Sandy and the High Country will be playing for the dance, which will run from 8 p.m. to midnight. The cost is $5 a person and kids under 12 are free. Refreshments and beer and wine will also be available.

On Monday, July 3, the Carson and Colorado Railway and the Eastern California Museum will host the Slim Princess Engine 18 Silver Spike Celebration. The day-long event will celebrate the recent relocation of the Southern Pacific Narrow Gauge Locomotive #18, the Slim Princess, to the museum grounds. The locomotive will be steamed up and run on the newest “short-line” railroad in Inyo County, which consists of about 300 feet of narrow gauge demonstration track coming out of the Larry Peckham Engine house. 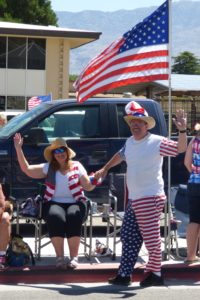 This couple got into the patriotic spirit of July 4 at the 2016 Independence Day Parade in Independence.

At noon, the “final spike” will be driven in the new section of track, and #18 will be steamed up and run down the track. Members of the restoration crew will be on hand to answer questions. At 4 p.m. local bluegrass band Idle Hands will start playing on the museum grounds. At 5 p.m., the world famous Trash Can Tri-Tip Dinner will be served, with a vegetarian option, for just a $15 donation. Call 760-878-02358 to RSVP for dinner.

Monday will be closed out with more music. The Party in the Park will feature the Zach Smith band playing in Dehy Park, from 8 p.m. to midnight.

The big day, July 4, will start with the American Legion’s flag raising ceremony at 6:25 a.m. in Dehy Park. The Lions Club will be serving a Pancake Breakfast from 6:30 a.m. to 9 a.m. in the park. Also, at 8 a.m. the day’s Arts and Crafts Show will be getting underway on the grounds of the Inyo County Courthouse. There is still time to get a booth at the Arts and Crafts Show, for a $15 fee. Call 760-937-2429, or email [email protected]

Another way to help with the Fourth of July is to make a donation to the Independence Volunteer Fire Department for the fireworks show. Donations of $200 or more will get a listing in the program. Any and all donations are welcome, no matter how big or small. Call the chief at 760-878-8016 for information, or just mail a donation to IVFD, PO Drawer B, Independence, CA 93526.

At 8:30 a.m., meet at Dehy Park for a Historic Walking Tour of Independence.

There is still time to enter the parade, either with a float, vehicle, a horse or mule entry, or a walking entry. Participants are encouraged to reflect the theme, which can be about early 20th century travel, or patriotic themes. There is no fee. Email [email protected] for an entry form.

At noon in Dehy Park, the Pioneer Methodist Pie Social kicks off, featuring homemade pie slices for a modest donation. A kids’ spelling bee will get underway at 12:30 p.m. in the park, and at 2 p.m. kids are invited to participate in the Olde Timey Kids’ Games.

Deep Pit Barbeque will be served from 4 to 6:30 p.m. in Dehy Park. The meal features tri-tip and all the trimmings and is a fundraiser for the Independence Civic Club.

The star- spangled festivities burst into action 7pm to 11pm Sunday July 2. Be triumphant with spirited Hot seat drawings and be victorious with over $2300.00 in cash and prizes ,including a 50 inch big screen TV.

Head on over, with your friends July 2 from 7pm to 11pm to Winnedumah Winns Casino where you are always a winner, when you stop at the Independence Travel
Plaza.

Stop in now for a spin of their new games, fill up with fuel,enjoy all the great food
selections and beverages, and commemorate Independence Day in style at Winnedumah Casino. Call 760-878-2483 for more information.