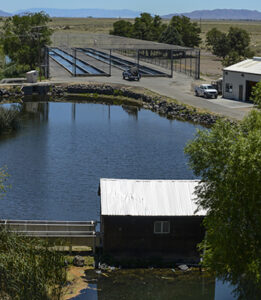 Just when you think the world could not get much weirder, it does.

Fish Springs and Black Rock fish hatcheries in Inyo County have been hit with an outbreak of lactococcus garvieae. Initially quarantined in late June, the decision has been made to euthanize the fish. Hot Creek Hatchery has been inspected and cleared; its quarantine was lifted June 25.

According to an information sheet from the California Department of Fish and Wildlife, posted on our website, the hatcheries will be disinfected. The soonest either will produce catchable fish is estimated to be spring of 2022.

Generally, a journalist’s job is not to look for silver linings. Our trade is, generally, bad news. However, the world has pretty much maxed out by bad news, so we went in search of a bright red tube of lipstick for this pig.

Tawni Thompson, executive director of the Bishop Chamber of Commerce, has been working with resort owners in the Bishop Creek Canyon on a supplemental stocking program with fish purchased from Wright’s Rainbows in Idaho. The guys at Reagan’s Sporting Goods said ponds like Buckleys and Sauders, normally not stocked, are ripe with bass in the early morning.

Despite the travel ban, Bill Dailey with CDF&W, reported high numbers of fishermen on the East Side. “They want to catch fish,” he said, “but they really just want to get out.”

Recently, Dailey said he had made more contact with fishermen in a single day than on an average Fishing Opener. But, one of his concerns with the lack of stocking is maintaining a good population of unpressured fish.

Fishing guide Pat Jaeger has the same concern about pressure once the flows slow and waters warm, but so far the fishing has been really good. “I’ve been guiding every day,” he said. “It’s been nutty.”

He predicted the fish will start to migrate to cooler temperatures. “It’s sort of a perfect storm,” he said. “You just have to find the right water.” Right now, that’s the East Walker and Upper Owens.

The one thing Jaeger has noticed is the lack of Europeans and a disproportionate number of out-of-state license plates. “People are freaked,” he said. “There have been a lot of spontaneous trips.”

Thanks for the “lipstick” ! We could all use a POSITIVE spin in our world racked by negativity & and the dark clouds that seem to never evaporate .