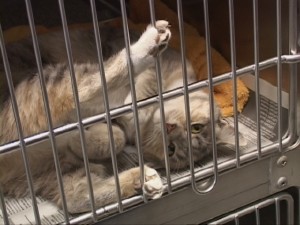 Proffitt said that the illness is isolated to what is known as the cat room. Most of the 47 cats seized in the earlier animal neglect case are housed in another part of the shelter. Proffitt said shelter workers are doing common sense treatment – vaccinating for known diseases and hydrating the cats who are ill.

The Animal Control Officer said it appears the animals are getting over the illness. “I hope we have seen the end of it,” he said. Proffitt did confirm Bishop Veterinary Clinic is handling lab tests to nail down the illness.

Proffitt said that standard operating procedures requires a hold on cat adoptions as a result of the disease. Officials hope to lift that hold soon.

We work to provide daily news to all of the Eastern Sierra, in the tradition of Eastern Sierra News Service and the Sierra Wave. We bring you daily happenings, local politics, crime, government dealings and fun stuff. Please contact us.
View all posts by News Staff →
Contract in the Works for More Air Service at Mammoth-Yosemite Airport
Mono County Works to Fill Vacancy on The Board of Supervisors