Dan Casteel, an inmate from the Inyo County Jail on drug charges and other allegations, took the witness stand in the Louis 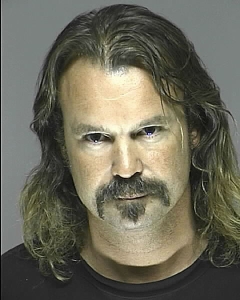 Inyo court records say Casteel wore a wire and recorded a conversation with Leplat when they were both in the Inyo jail. Casteel was expected to testify to what Leplat said to him, allegedly about the stabbing death of James Rambeau nearly two years ago.

According to Ventura County court records, Casteel took the witness stand yesterday. Records said that defense attorney Neil Quinn put on the record that Casteel is not to mention anything regarding gang affiliation or retaliation. Judge Charles Campbell advised the jury that Casteel is in custody in Inyo with pending cases.

Defense attorney Quinn made an objection to Casteel’s testimony based on what’s called a Massiah Violation, relating to law enforcement eliciting statements from a defendant without his attorney present, after criminal charges have been filed. Casteel was expected to take the witness stand throughout the week.

We work to provide daily news to all of the Eastern Sierra, in the tradition of Eastern Sierra News Service and the Sierra Wave. We bring you daily happenings, local politics, crime, government dealings and fun stuff. Please contact us.
View all posts by News Staff →
Hispanic Advisory Committee meets Tuesday
Final clean-up work complete at Cottonwood Plaza