At least two banks in Bishop were the victims of attempted thefts sometime on Monday night.

Union Bank and Eastern Sierra Community Bank, which are located across the street from one another on North Main Street, each had unsuccessful attempts at breaking into and removal of their wall mounted night deposit drop boxes.

If nothing else was proven, it is that sometimes cash withdrawals, especially late at night from night deposit bank drop boxes, can be exceedingly difficult. It is not known if the suspect or suspects were aware of the banks’ afterhours cash withdrawal limit policies or if they were just “unclear” of the difference between a deposit and a withdrawal. 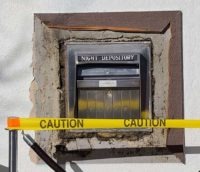 There is an active ongoing investigation by detectives at the Bishop Police Department. Surveillance tapes are being looked at for clues as to the identity or identities of the person or persons behind attempted “heists.” It’s a safe bet that local Mensa members have been ruled out as suspects and there is a distinct possibility that that the wannabe robbers may have been wearing masks.

Sierra Wave News will provide more details as soon as they become available.

Lindy, you should try to write a breaking news story when all you have are a half-dozen photos, with very little information, and you are being pressured to just get the story posted before anyone else. LOL. Thanks for sharing your thoughts. Please stay safe and stay well!