Recreation in Mammoth Lakes took one step forward at the Town Council meeting on Wednesday night, and it looks as though the Tourism and Recreation Department as the town currently knows it could end up being broken into three pieces going forward into the 2010/11 fiscal year. 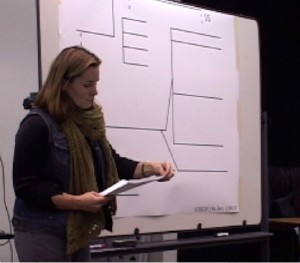 Tourism and Recreation Director Danna Stroud presented an organizational chart to the Council at their Jan. 20 meeting. The chart was the result of the Mammoth Region Recreation Council (MRRC) that had been formed last fall when budget cuts had brought the Town perilously close to cutting back the recreation department.

Members of the MRRC had started out looking at recreation with a region-wide attitude. However, by the end of their approximately five meetings, the group realized that Mammoth Lakes’ recreation and region-wide recreation on public lands would need to be split into two pieces, explained Stroud.

The idea behind the Mammoth specific piece would be to add an additional organization, currently dubbed Mammoth Lakes Recreation, or MLR, to the Town’s recreation arsenal. Currently, the Town’s Recreation Department has its hands full just taking care of the core services that residents and visitors expect a town to provide. MLR would be an extension that could be added in order to give the Town an extra set of eyes and ears that would be responsible for dealing with issues, ideas and projects that cross over into lands outside of the Town’s boundaries, but which the Town still has an interest in. Funding for the MLR could come from Measure R, business sponsorships, and grants, Stroud said.

One member of the public, Sandy Hogan, felt that the plan that had emerged from the MRRC, while full of good ideas, was not focused enough on the core services.

“Don’t try to jam both these things into the 2010/11 fiscal year budget,” Hogan suggested. “Put a subcommittee together just to focus on the core services and bring three budget options back to Council. I call this taking care of business and dealing with what we have first before adding something else.”

CEO of MLTPA, John Wentworth, agreed that a subcommittee needed to be put together, but felt that such a subcommittee should address both core services and the potential of MLR at the same time. A gap analysis needs to be done to see what the Town’s Recreation Department is already covering and what is falling through the cracks that MLR could pick up, according to Stroud.

Wentworth’s interest in the process comes from the potential of MLTPA morphing into MLR. With its contract for services already in place with the Town through Measure R funds, it would just be a matter of taking a look at what MLTPA is currently doing for the Town and what MLR would need to do and reconciling the differences. According to Stroud, MLTPA as MLR would function in a similar fashion to the way Mammoth Lakes Housing functions as an arm of the Town through a contract for services.

Council agreed in theory to the separation of core services and MLR, but sent MRRC out to further analyze what the Town’s Recreation Department would be responsible for, and what would fall into the realm of MLR.

On a parallel track, Teri Stehlik, a member of the DMO, or Destination Marketing Organization, Board, which has been going through a similar development process for the Tourism side of the Tourism and Recreation Department, explained to the Council that their process is also nearing a conclusion. Both Stroud and Stehlik agreed that the DMO and the MRRC should be ready to report out on their individual developments by the end of February.

At that time, the two groups would then need to reconcile with one another, most likely during the month of March, in order to come up with an overall plan for the reconstruction of Tourism and Recreation. The groups will work with Town staff to make sure their ideas coincide with other departments such as Community Development and Public Works. Then, Stroud explained, the entire reconstruction plan will be put into the budget planning cycle to determine the final outcome.

We work to provide daily news to all of the Eastern Sierra, in the tradition of Eastern Sierra News Service and the Sierra Wave. We bring you daily happenings, local politics, crime, government dealings and fun stuff. Please contact us.
View all posts by News Staff →
Mixed News For the Sierra Snowpack
Cottonwood Plaza: Clear Title, Hazy Future